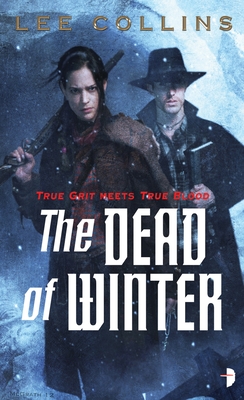 Cora and her husband hunt things - things that shouldn't exist. When the marshal of Leadville, Colorado, comes across a pair of mysterious deaths, he turns to Cora to find the creature responsible, but if Cora is to overcome the unnatural tide threatening to consume the small town, she must first confront her own tragic past as well as her present.

“From its opening chapter, The Dead of Winter lassoed me into
its gritty world of gunslingers and demons. A page-turning thrill ride
of a novel that could well redefine your perception of the ‘wild’ west.”
- Rio Youers, author of Westlake Soul

“The Dead of Winter ain’t your granddad’s Western. Lee Collins paints a picture of the Colorado wilds as cold and unforgiving as the creatures that inhabit them. And in Cora Oglesby, Collins has created a heroine as tough as saddle-leather, and as fiery and sharp as rotgut whiskey. Read it with the lights on – but for damn sure read it.”
- Chris F Holm, author of Dead Harvest and The Wrong Goodbye

Lee Collins has spent his entire life in the shadow of the Rocky Mountains. Despite this (or perhaps because of it), he generally prefers to stay indoors reading and playing video games. As a child, he never realized that he could create video games for a living, so he chose to study creative writing at Colorado State University. Upon graduation, he worked as an editorial intern for a local magazine before securing a desk job with his alma mater.

Lee's short fiction has appeared in Ensorcelled and Morpheus Tales, the latter of which awarded him second place in a flash fiction contest. In 2009, a friend challenged him to participate in National Novel Writing Month, and the resulting manuscript became his debut novel, Dead of Winter.

In his spare minutes between writing and shepherding graduate students at his day job, Lee still indulges in his oldest passions: books and video games. He and his girlfriend live in Colorado with their imaginary corgi Fubsy Bumble.
or
Not Currently Available for Direct Purchase