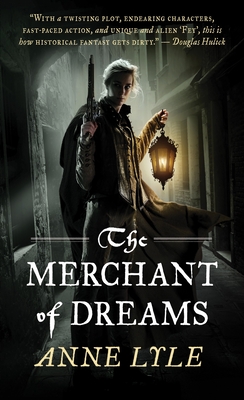 The Merchant of Dreams

Exiled from the court of Queen Elizabeth for accusing a powerful nobleman of treason, swordsman-turned-spy Mal Catlyn has been living in France with his young valet Coby Hendricks for the past year.

But Mal harbours a darker secret: he and his twin brother share a soul that once belonged to a skrayling, one of the mystical creatures from the New World.

When Mal’s dream about a skrayling shipwreck in the Mediterranean proves reality, it sets him on a path to the beautiful, treacherous city of Venice – and a conflict of loyalties that will place him and his friends in greater danger than ever.

Praise For The Merchant of Dreams: Night's Masque, Volume 2…

"Whether you like action, magic, romance or mystery there is something for you here. I never had a reason to put the book down. I am very eager to read the third book in the series."
- Mazarkis Williams, author of the Tower & Knife series

“There’s a lot of intrigue and a great sense of adventure in this sequel to The Alchemist of Souls."
-SciFi Fan Letter

“This may be one of the best historical fiction/fantasy novels of 2012. 5/5"
-The Founding Fields

“…a historical fantasy that is as light-hearted and entertaining as it is deep."
-Elloise Hopkins

Author is nominee for the Sydney J. Bounds Award for Best Newcomer