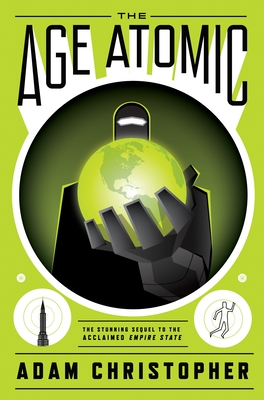 The Empire State is dying. The Fissure connecting the pocket universe to New York has vanished, plunging the city into a deep freeze and the populace are demanding a return to Prohibition and rationing as energy supplies dwindle.

Meanwhile, in 1954 New York, the political dynamic has changed and Nimrod finds his department subsumed by a new group, Atoms For Peace, led by the mysterious Evelyn McHale.

As Rad uncovers a new threat to his city, Atoms For Peace prepare their army for a transdimensional invasion. Their goal: total conquest – or destruction – of the Empire State.

"If you're not careful, Adam Christopher will melt your face off with The Age Atomic: the heat of the prose pairs with searing action. This is fireball storytelling and a rare follow-up that's better than its predecessor."
- Chuck Wendig, author of Blackbirds

"The Age Atomic is another masterful tale by Adam Christopher. An action-packed noir Atompunk tale with more layers, facettes and twists than one would expect and which keeps the reader enthralled from the first to the last page. Highly recommended reading!"
-Traveler, Daily Steampunk

More praise for Adam Christopher:
"Adam Christopher's debut novel is a noir, Philip K Dick-ish science fiction superhero story... a novel of surreal resonances, things that are like other things, plot turns that hearken to other plot turns. It's often fascinating, as captivating as a kaleidoscope... just feel it in all its weird glory."
- Cory Doctorow, author of Makers and Little Brother, on Empire State

"Christopher's tightly plotted novel is a truly original debut that, while subtly referencing Orwell, Kafka, Marvel comics and Philip K Dick, manages to maintain its own distinctive tone – a genuine pathos and longing for something elusively other. Recommended."
- The Guardian

"Adam Christopher maintains a punchy, bestseller prose style that keeps the action rocketing along, and protagonists that seem right both in their own setting, and appropriate to what we already recognise as super heroes. Empire State is an excellent, involving read, and it fully deserves to be the start of a new universe."
- Paul Cornell, Doctor Who scriptwriter, and author of Stormwatch and Demon Knights

"A daring, dreamlike, almost hallucinatory thriller, one that plays with the conventions of pulp fiction and superheroes like a cat with a ball of yarn."
- Kurt Busiek, Eisner Award-winning writer of Astro City and Marvels

"As it happens, I'm a sucker for hard-boiled retro sci-fi stories; rocket-powered superheroes, spunky dames, fedoras, Studebakers slewing round gritty Gotham street-corners on two wheels, and Adam Christopher sure knows his way around a tightly spun yarn – I was a pig in poop from page one! As they say: This story? She's a real sweater-full, with a great pair'a getaway sticks... Watch out for this Adam kid, he's nobody's sap. He's got a sharp nib and a sharper wit. He'd steal your last few hours before you could say 'cat's pajamas', and you'd thank him for it."
— Billy Campbell, star of The Rocketeer

"This is traditional heroism with a decidedly wicked and iconoclastic twist. Inventive, engaging, bewitching, and delightful, a feast as much for fans of the tropes as for the innocents amongst us."
- Greg Rucka, New York Times bestselling author of Alpha, The Punisher and Batman

"Adam Christopher grabbed everyone's attention with his debut novel Empire State, and his follow up Seven Wonders will surely please all of his readers who have been waiting breathlessly for more. A smart, entertaining, energetic take on the superhero genre."
- Victor Gischler, writer of X-Men and Deadpool

"A blast of pure pleasure. This is Watchmen meets NYPD Blue, while The Incredibles stroll by; fast-moving action infused with Christopher's infectious love of pulp fiction and the superhero genre."
- Philip Palmer, author of Version 43, Hell Ship and Artemis

"[Empire State] revelled in 1930s noir movies and pulp fiction. [The Age Atomic] - a worth successor - touches on the Red Menace paranoia of the dawn of the nuclear era but has the same jazzy plotting and anything-goes attitude that made Empire State such an unalloyed pleasure."
-The Financial Times

Adam Christopher was born in Auckland, New Zealand, and grew up watching Pertwee-era Doctor Who and listening to The Beatles, which isn't a bad start for a child of the 80s. In 2006, Adam moved to the sunny North West of England, where he now lives in domestic bliss with his wife and cat in a house next to a canal, although he has yet to take up any fishing-related activities.

When not writing Adam can be found drinking tea and obsessing over DC Comics, Stephen King, and The Cure. He is also a strong advocate for social media, especially Twitter, which he spends far too much time on avoiding work.

Visit www.adamchristopher.co.uk The author lives in Great Britain.
Loading...
or
Not Currently Available for Direct Purchase