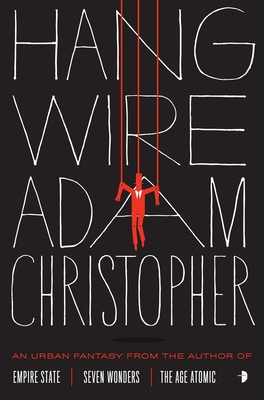 Ted Hall is worried. He’s been sleepwalking, and his somnambulant travels appear to coincide with murders by the notorious Hang Wire Killer.

Meanwhile, the circus has come to town, but the Celtic dancers are taking their pagan act a little too seriously, the manager of the Olde Worlde Funfair has started talking to his vintage machines, and the new acrobat’s frequent absences are causing tension among the performers.

Out in the city there are other new arrivals – immortals searching for an ancient power – a primal evil which, if unopposed, could destroy the world!

"Christopher fulfils our expectations and more: just when we think the story couldn’t get any weirder, he adds a whole new layer of weird, bouncing from one unexpected moment of goofiness to another, keeping us stuck to our chairs until we think it’ll take an industrial-strength solvent to pry us loose. Days after finishing the book, you’ll still have a grin on your face."
-Booklist (Starred Review)

"Adam Christopher's debut novel is a noir, Philip K Dick-ish science fiction superhero story... a novel of surreal resonances, things that are like other things, plot turns that hearken to other plot turns. It's often fascinating, as captivating as a kaleidoscope... just feel it in all its weird glory."
-Cory Doctorow, author of Makers and Little Brother, on Empire State

"This is traditional heroism with a decidedly wicked and iconoclastic twist. Inventive, engaging, bewitching, and delightful, a feast as much for fans of the tropes as for the innocents amongst us."
-Greg Rucka, New York Times bestselling author of Alpha, The Punisher and Batman, on Seven Wonders

Adam Christopher was born in Auckland, New Zealand. In 2006, he moved to the sunny North West of England, where he lives in domestic bliss with wife and cat in a house next to a canal. Adam's short fiction has appeared in Pantechnicon, Hub, and Dark Fiction Magazine.

When not writing Adam can be found drinking tea and obsessing over Dark Shadows, DC Comics, and 1960s Doctor Who. Adam is also very bad at épée but knows that Thibault cancels out Capa Ferro, unless the enemy has studied his Agrippa. Which he has.
Loading...
or
Not Currently Available for Direct Purchase