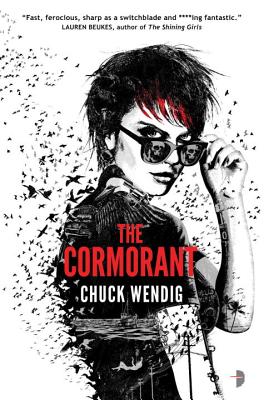 Miriam is on the road again, having transitioned from "thief" to "killer".

Hired by a wealthy businessman, she heads down to Florida to practice the one thing she's good at, but in her vision she sees him die by another's hand and on the wall written in blood is a message just for Miriam. She's expected...

File Under: Urban Fantasy [ Plying Her Trade | Inevitable | Touch of Death | No More! ]

Praise For The Cormorant…

"Visceral and often brutal - vibrates with emotional rawness that helps to paint a bleak, unrelenting picture of life on the edge."
-Publishers Weekly

"fast, ferocious, sharp as a switchblade and fucking fantastic"
-Lauren Beukes, author of Zoo City and The Shining Girls

"Wendig's surefooted prose means that this ride is well worth sticking your thumb out for." - SFX Magazine

"If you're looking for a sassy, hard-boiled thriller with a paranormal slant, Wendig has established himself as the go-to man."
- The Guardian

Chuck Wendig is equal parts novelist, screenwriter, and game designer - A.K.A. an all-around "freelance penmonkey." You can probably find him on the side of a highway holding a sign, "Will Write For Booze." He currently lives in the wilds of Pennsyltucky with wife, dog, and infant heir to the Wendig throne. You can find him dispensing dubious writing advice at his blog, terribleminds.com. Chuck was nominated for the 2013 John W. Campbell Award for Best New Writer.
Loading...
or
Not Currently Available for Direct Purchase