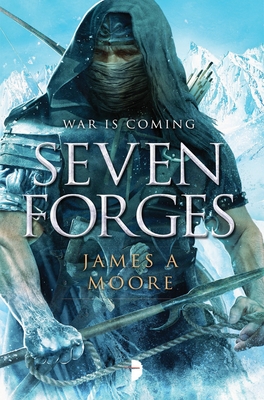 Captain Merros Dulver is the first in many lifetimes to find a path beyond the great mountains of the Seven Forges and encounter, at long last, the half-forgotten race who live there. And it would appear that they were expecting him. But when he returns home, an entourage of strangers in tow, he starts to wonder if his discovery is truly something to celebrate—for the gods of this lost race are the gods of war, and their memories of that far-off cataclysm have not faded.

The people of Fellein have lived with the legends of the Blasted Lands for many centuries. Lying far to the north, the Lands are a desolate, impassable place—the legacy of an ancient time of cataclysm. But even the dangers of the Blasted Lands cannot stop the occasional expedition into its fringes, where people search for any trace of the ancients and oft-rumored riches that once lived there.

“Seven Forges is an excellent, enjoyable, and thoroughly entertaining fantasy debut into a new world of swords and sorcery, complete with romance, intrigue, and danger.”
– Attack of the Books

“Wow, that twist. In some ways I think I should have seen it coming, and I kind of did, butSeven Forges just lulled me into security and BAM! Craziness!”
– Anya, On Starships and Dragonwings

“Seven Forges is a well written fantasy adventure with a very interesting premise and a big world to explore. ”
– Celticfrogreviews

“I thoroughly enjoyed Seven Forges although I was left speechless by the ending and left wondering for days whether there was to be another book in the series. There were so many threads of stories left open that I need to know what happens next.”
– The Bookish Outsider

“Moore does a fantastic job of building worlds and characters in Seven Forges as we hop on board the train that is about to meet its doom.”
– Troubled Scribe

“James A. Moore dedicates Seven Forges in part ‘to the memory of Fritz Leiber and Robert E. Howard for the inspiration.’ That dedication sets the bar high, and caused me a bit of readerly apprehension, because so many writers have imitated badly those two greats of the sword and sorcery tradition. Moore is far more than an imitator, though. He does some fresh, counterintuitive things with the genre conventions. More than once, he startled me into saying out loud, ‘I didn’t see that coming.'”
– Black Gate

James A. Moore is a Stoker Award-nominated author of over twenty novels, including tie-in work for Buffy the Vampire Slayer. James has written extensively for White Wolf Publishing in the World of Darkness setting. James lives in Atlanta, GA.
Loading...
or
Not Currently Available for Direct Purchase