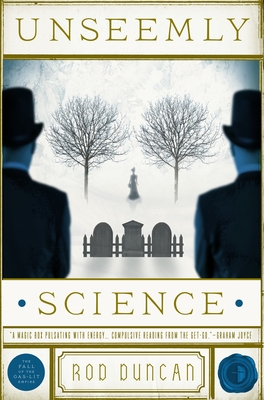 Unseemly Science (The Fall of the Gas-Lit Empire #2)

In the divided land of England, Elizabeth Barnabus has been living a double life - as both herself and as her brother, the private detective. Witnessing the hanging of Alice Carter, the false duchess, Elizabeth resolves to throw the Bullet Catcher's Handbook into the fire, and forget her past. If only it were that easy!

There is a new charitable organisation in town, run by some highly respectable women. But something doesn't feel right to Elizabeth. Perhaps it is time for her fictional brother to come out of retirement for one last case...? Her unstoppable curiosity leads her to a dark world of body-snatching, unseemly experimentation, politics and scandal. Never was it harder for a woman in a man's world...

Praise for The Fall of the Gas-Lit Empire:

The Bullet-Catcher's Daughter -- Nominated for the 2014 Phillip K. Dick Award

“Steeped in illusion and grounded in an alternative history of the Luddite Rebellion, Duncan’s strong supernatural mystery serves ably as both a standalone adventure and the start to a series…Strategically placed steampunk tropes inform but do not overwhelm Elizabeth’s headlong quest to find a missing aristocrat sought by the Patent Office, which is fixated on both achieving perfection and eliminating “unseemly science.” A hazardous border crossing into the permissively corrupt Kingdom of England and Southern Wales provides ample excitement, and a glossary at the novel’s conclusion hints enticingly at a much more involved story to come.”
–Publishers Weekly

“I was completely caught up in her adventure and her plight. I think steampunk readers and fantasy/sci-fi readers will enjoy this one, so I’m recommending it for them even though (and to some extent because) its use of steampunk is a bit different. I found it to be a refreshing change from more formulaic steampunk novels.”
–Popcorn Reads

“A detective story with a difference … Chapters begin with quotes from the legendary Bullet-Catcher’s Handbook, phrases that introduce not only the idea of illusion that pervades the novel, but also the author’s sly humour. [Duncan’s misdirection is] subtly and well done, all the way through the book, right to a neat little twist at the end, a play on the title that had me nodding in approval. Each [character] is vividly portrayed, lively enough to feel like the heroes of their own stories, all with distinctive voices; it’s always a good sign when you find yourself reading dialogue out loud, rolling your lips and tongue around the words. Rod Duncan’s talent has combined inventive plot and characterisation to create a smart, amusing and fascinating tale that had me reading long into the night.”
–Fantasy Faction

“It’s all steampunk and circus wonder as we follow the adventures of Elizabeth Barnabas.The double crosses along the way keep the plot tight and fun, and the conclusion sets us up nicely for book two.”
– The Washington Post, Best New Science Fiction and Steampunk