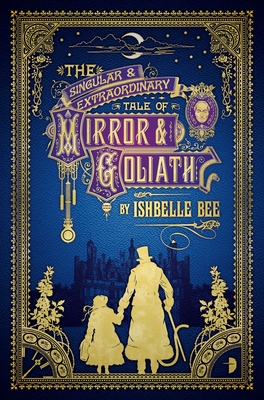 1888. A little girl called Mirror and her shape-shifting guardian Goliath Honeyflower are washed up on the shores of Victorian England. Something has been wrong with Mirror since the day her grandfather locked her inside a mysterious clock that was painted all over with ladybirds. Mirror does not know what she is, but she knows she is no longer human.

John Loveheart, meanwhile, was not born wicked. But after the sinister death of his parents, he was taken by Mr. Fingers, the demon lord of the underworld. Some say he is mad. John would be inclined to agree.

Now Mr Fingers is determined to find the little girl called Mirror, whose flesh he intends to eat, and whose soul is the key to his eternal reign. And John Loveheart has been called by his otherworldly father to help him track Mirror down...

Ishbelle Bee writes horror and loves fairy-tales, the Victorian period (especially top hats!) and cake tents at village fêtes. (She believes serial killers usually opt for the Victoria Sponge). She currently lives in Edinburgh. She doesn't own a rescue cat, but if she did his name would be Mr Pickles.
Loading...
or
Not Currently Available for Direct Purchase