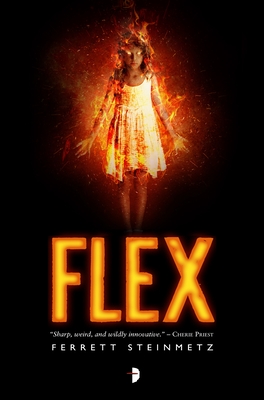 The first in a “sharp, weird, and wildly innovative” urban fantasy series about a desperate father who embraces a forbidden magic in order to save his daughter (Cherie Priest, Locus Award winner and Hugo Award nominee)

Flex: Distilled magic in crystal form. The most dangerous drug in the world. Snort it, and you can create incredible coincidences to live the life of your dreams.

Flux: The backlash from snorting Flex. The universe hates magic and tries to rebalance the odds; maybe you survive the horrendous accidents the Flex inflicts, maybe you don’t.

Paul Tsabo: The obsessed bureaucromancer who’s turned paperwork into a magical Beast that can rewrite rental agreements, conjure rented cars from nowhere, track down anyone who’s ever filled out a form.

But when all of his formulaic magic can’t save his burned daughter, Paul must enter the dangerous world of Flex dealers to heal her. Except he’s never done this before—and the punishment for brewing Flex is army conscription and a total brain-wipe.

“Do you like magic? Do you like drugs? Donut-based psychological theories? Video games? Do you like PAPERWORK!? Read this book!”
—Ann Leckie, author of Ancillary Justice and winner of the Hugo, Nebula and Arthur C. Clarke Awards

“Flex is a real gem—sharp, weird, and wildly innovative. It zigs when you think it’ll zag, then tricks you into screaming when you’re ready to laugh out loud. So drop everything and settle in for the night—because once you open this one, you’re not going anywhere.”
—Cherie Priest, author of Boneshaker, winner of the Locus Award for Best Novel

“Amazing. I have literally never read a book like this. Read this NOW, if only to be forced to turn the page wondering what the hell Steinmetz is going to come up with next.”
—Mur Lafferty, Campbell award-winning “Best New Writer 2013” and author of The Shambling Guide to New York

“Featuring one of the most original magic systems ever devised and a pair of likable, layered protagonists, Flex is a fast-paced, imaginative, and emotionally engaging adventure. The developing friendships and rapport among the characters are portrayed with sensitivity and avoids cliches, and the magical battle sequences are rigorous and filled with ingenious touches that will make gamers and tax lawyers alike grin with joy.”
—Ken Liu, winner of the Nebula, Hugo, and World Fantasy Awards

“Flex is hot, inventive, and exciting.  A real joyride of a story . . . a whole new kind of magic and a whole new ballgame. Totally recommended.”
—Seanan McGuire, winner of the John W. Campbell Award and Hugo-nominated author

“Flex is a breath of magical, drug-addled, emotionally tortured fresh air, with one of the most unique and fascinating main characters I’ve read in ages. In an urban fantasy genre filled with handsome vampires and sassy witches, Ferrett presents us with Paul Tsabo—a Greek insurance adjuster with a prosthetic foot, forced into the half-mad underworld of a reality-bending narcotic to save his daughter from a devastating house fire. With great characters, evocative writing, and boundless creativity, Flex is one of the strongest debut novels I’ve ever seen, and one of my favorite novels of the year.”
—Dan Wells, author of I Am Not a Serial Killer

“Not since Philip K Dick started toying with reality for fun and profit has there been a novel so enjoyably hallucinatory as Flex. A heady mix of the surreal and the mundane, it will appeal to fans of video games, donuts, insurance, bureaucracy, and crime families.  Oh, and modern-day mage wars. Yet for all of its wild plot, this is a story about the tender bond between parents and children, the loyalty of friends and how the odd among us find their places in the world. Ferrett Steinmetz has written a page turner!”
—James Patrick Kelly, winner of the Hugo, Nebula and Locus Awards

“When we think of magic users in fiction, we tend to think of magicians like Dumbledore or Gandalf: wise, old graybeards whose professorial robes invoke their deep education into occult arcana. They are cool, collected practitioners of their arts. Even less establishment sorcerers tend to have a sheen of coolness about them; think of Kate Daniels or Harry Dresden, swathed in black, working as mercenaries or detectives, out in the thick of it. Which is why it is so utterly charming to meet Paul Tsabo in Flex, the debut novel from Ferrett Steinmetz.”
—Barnes & Noble

“A well-paced, sometimes serious, sometimes zany mission to save the world from a mass murderer, with some moral dilemmas mixed in for spice, Flex was an enjoyable read that ended up somewhere close to Breaking Bad by way of Scott Pilgrim versus the World. [4 1/2 stars]”
—Speculative Post

Ferrett Steinmetz is a graduate of both the Clarion Writers' Workshop and Viable Paradise, and has been nominated for the Nebula Award, for which he remains stoked.

He lives in Cleveland with his wife, who he couldn't imagine living without.
Loading...
or
Not Currently Available for Direct Purchase