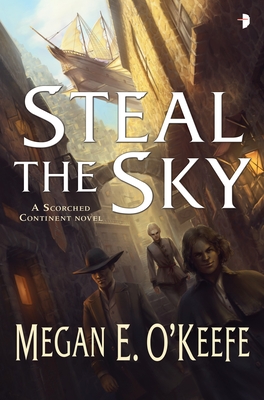 Steal the Sky (The Scorched Continent #1)

Detan Honding, a wanted conman of noble birth and ignoble tongue, has found himself in the oasis city of Aransa. He and his trusted companion, Tibs, may have pulled off one too many cons against the city’s elite and need to make a quick escape. They set their sights on their biggest heist yet—the gorgeous airship of the exiled commodore Thratia.

But in the middle of his scheme, a face changer known as a doppel starts murdering key members of Aransa’s government. The sudden paranoia makes Detan’s plans of stealing Thratia’s ship that much harder. And with this sudden power vacuum, Thratia can solidify her power and wreak havoc against the Empire. But the doppel isn’t working for Thratia and has her own intentions. Did Detan accidentally walk into a revolution and a crusade? He has to be careful—there’s a reason most people think he’s dead. And if his dangerous secret gets revealed, he has a lot more to worry about than a stolen airship.

File Under: Fantasy [ Sky Heist | Doppel Vision | Knives Out | Up Up and Away ]

Praise For Steal the Sky (The Scorched Continent #1)…

"O'Keefe's dialogue is as nimble as Detan's thieving fingers, and his inevitable tragic secrets lend needed gravitas to his wise-cracking, card-sharp persona...Green things may not last long in the Scorched, but with Steal the Sky, O'Keefe has cultivated fertile ground for the next books in her promising trilogy to grow."
-Jason Heller, NPR

“Megan O’Keefe’s prose is so full of fascinating twists and delights, you won’t want to put it down. Go ahead, open it up: I dare you!”
- David Farland, author of the bestselling Runelords series

“Blend two lovable rogues, a magical doppelganger, and a nasty empire,
and you have O’Keefe’s Steal the Sky. It’s like an epic steampunk Firefly.”
- Beth Cato, author of The Clockwork Dagger

“There is a great deal of luscious description of Aransa which really gives some quality immersion in Dentan’s world without slowing down the plot. The dialogue is also excellent and really helps to flesh out the characters and get you emotionally involved with them. The politics of the world is complex and well-wrought. I can’t wait to see what Dentan, Tibs and their gradually accumulated band of accomplices get up to next.”
– Strange Alliances

“If you’re looking for a fast read full of breezy dialogue, imaginative worldbuilding, and capers galore, Steal the Sky is definitely worth a look.”
– Bookaneer

“Steal the Sky is a fun romp that shows a lot of promise for O’Keefe in her debut novel. With the quality of the storytelling as a whole, I shouldn’t be surprised O’Keefe was a first place winner in the Writers of the Future. Not only is Steal the Sky O’Keefe’s debut, it launches the Scorched Continent series and does a fine job of laying out a foundation for future stories. Readers who enjoyed Beth Cato’s Clockwork Dagger and Jim Butcher’s The Aeronaut’s Windlass will likely find themselves drawn into Megan E. O’Keefe’s adventurous Steal the Sky.”
– SFF World

“Steal the Sky works well as a standalone adventure, but the ending hints at more interesting times to come for Detan and Ripka, their various friends and foes, and the whole of the surrounding lands. I’ll definitely be looking out for more in this world.”
– Strange Charm

“I would definitely recommend Steal the Sky.  It’s a very entertaining read.  The characters are a great combination of goodies and baddies and somewhere inbetweens.  The writing is smooth, the plot dives about like a maniac and the ending is a great set up for the next book.”
– The Speculative Herald

“If you’re a fan of old-school sword-and-sorcery, enjoy rooting for the Han Solos and Malcolm Reynolds of the world, and appreciate the mix of witty dialogue and slow-burning adventure, Steal the Sky is well worth a read.”
– Beauty in Ruins

“Steal the Sky is a fine novel. If you are a Steampunk aficionado, Steal the Sky is right up your alley, as it is for “alternate earthers.” The plot will keep you hanging until the final die is cast, and there is enough background material to whet anyone’s fancy.”
– Open Book Society

“An enjoyable fantasy novel with a lot of promise.”
– Don’t Be Afraid of The Dark

“I’m really looking forward to the next book! If you enjoyed Firefly, like steampunk in your fantasy, or like adventure stories, heist stories, or stories about loyalty then this is well worth your time.”
– The Conversationalist

"This is a writer – and a series – you are not going to want to miss."
– Erlebnisse

“This has all of the elements I look for when shopping for a new book: danger, fast-paced action, camaraderie and light-hearted humour.”
– Cowering King

Megan E. O’Keefe lives in the Bay Area of California and makes soap for a living. (It’s only a little like Fight Club.) She has worked in arts management and graphic design, and spends her free time tinkering with anything she can get her hands on.

Megan is a first place winner in the Writers of the Future competition, vol. 30. Steal the Sky is her first novel.

You can find Megan online at meganokeefe.com and@MeganofBlushie on Twitter.
Loading...
or support indie stores by buying on
(This book is on backorder)