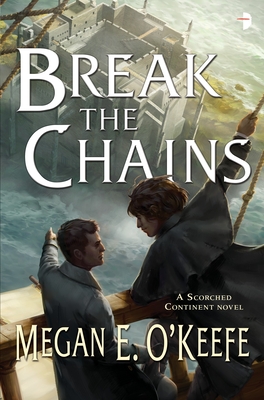 Break the Chains (The Scorched Continent #2)

As the city that produces the most selium - that precious gas that elevates airships and powers strange magic - Hond Steading is a jewel worth stealing. To shore up the city's defenses, Detan promises his aunt that he'll recover Nouli, the infamous engineer who built the century gates that protect the imperial capital of Valathea. But Nouli is imprisoned on the Remnant Isles, an impervious island prison run by the empire, and it's Detan's fault.

Detan doesn't dare approach Nouli himself, so his companions volunteer to get themselves locked up to make contact with Nouli and convince him to help. Now Detan has to break them all out of prison, and he's going to need the help of a half-mad doppel to do it.

File Under: Fantasy [Century Gates / The Remnant Isles / Break In, Break Out / Away, Away and Up!]

Praise For Break the Chains (The Scorched Continent #2)…

“I must confess that I tore through this instalment, and I’m really looking forward to the next one.”
– Sci-Fi and Fantasy Reviews

“I am so glad to say that this book lived up to my pretty high expectations perfectly. I loved it. Detan is back and just as cocky as ever.”
– Ever the Crafter

“Break the Chains is a fantastic follow up to Steal the Sky. This is what anticipating a new fantasy series should feel like!”
– The Conversationalist

"An excellent sequel to the excellent Steal The Sky."
– Reading Trance

“The dialogue was awesome, the details were everything I wished all books would include more of and I continue to be fascinated by the harsh setting and great worldbuilding. O’Keefe masterfully manipulated my emotions and completely shredded my heart and, as a writer, I am so impressed; as the heartbroken reader, I’m anxiously awaiting Inherit the Flame.”
– Erlebnisse

“Heartwarming camaraderie and an endless supply of crossbow bolts make Break the Chains one of the most fun novels of 2016.”
– Cowering King

“It’s a buddy tale, a heist caper, a socioeconomic thriller and a steampunk-seasoned fantasia all at once. And it fires beautifully on all cylinders.”
– Jason Heller for NPR

“Megan O’Keefe’s prose is so full of fascinating twists and delights, you won’t want to put it down. Go ahead, open it up: I dare you!”
David Farland, author of the bestselling Runelords series

“Come for the heist, stay for the inventive world building.”
– Kirkus Reviews

“The tension rises throughout, leading up to an action packed third act, with some characters living up to their full potential. Mysteries keep unfolding, and you never truly learn the whole story, which means that there is now yet another series that I’m eagerly anticipating the follow up to.”
– Fantasy Faction

“Steal the Sky is a fun secondary-world adventure with plenty of exciting action, surprising twists, and wonderful payoffs to small seeds skillfully laid throughout the story.”
– Lightspeed Magazine

Megan E O'Keefe lives in the Bay Area of California and makes soap for a living. (It’s only a little like Fight Club.) She has worked in arts management and graphic design, and spends her free time tinkering with anything she can get her hands on.