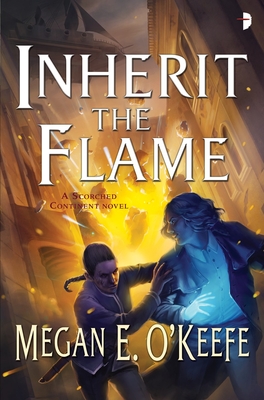 Inherit the Flame (The Scorched Continent #3)

Detan Honding is determined to survive this war, even when caught between not one but two besieging armies! After rescuing the renowned engineer Nouli from the clutches of the empire, the valiant rogue has returned to his aunt’s city – to find it under siege by Thratia’s army. With Nouli’s help, they manage to turn back the tide, at least until imperial forces descend, prepared to hammer the Thratian force against the anvil of the city’s walls. Worse yet, the imperial advance is aided by an elite force of dark magicians.

His aunt is forced to forge an uneasy alliance with Thratia to keep the city from falling back under imperial control – but Detan’s wary. While Thratia and his aunt bring their forces to bear against the new threat, Detan puts his own plans into motion – to ensure that when the final blow is dealt, Thratia and her army will find themselves on the other side of the city’s walls.

Praise For Inherit the Flame (The Scorched Continent #3)…

"A worthy conclusion to the series."
- Sci-Fi and Fantasy Reviews

"This is the ending that the series deserved."
- Ever the Crafter

“Read the trilogy; it is very much worthy of your attention.”
– Morpheus Tales

Praise and Reviews for the Scorched Earth series

"Blend two lovable rogues, a magical doppelganger, and a nasty empire, and you have O'Keefe's Steal the Sky. It's like an epic steampunk Firefly."
- Beth Cato, author of The Clockwork Dagger

"The storyline and world building were impeccable as were the depth of the characters that inhabited it. I am really looking forward to more from this author."
- Koeur's Book Reviews

"The tension rises throughout, leading up to an action packed third act, with some characters living up to their full potential. Mysteries keep unfolding, and you never truly learn the whole story, which means that there is now yet another series that I’m eagerly anticipating the follow up to."
- Fantasy Faction

“It’s a buddy tale, a heist caper, a socioeconomic thriller and a steampunk-seasoned fantasia all at once. And it fires beautifully on all cylinders.”
– Jason Heller for NPR

“Megan O’Keefe’s prose is so full of fascinating twists and delights, you won’t want to put it down. Go ahead, open it up: I dare you!”
– David Farland, author of the bestselling Runelords series

“Come for the heist, stay for the inventive world building.”
– Kirkus Reviews

“The tension rises throughout, leading up to an action packed third act, with some characters living up to their full potential. Mysteries keep unfolding, and you never truly learn the whole story, which means that there is now yet another series that I’m eagerly anticipating the follow up to.”
– Fantasy Faction

“Steal the Sky is a fun secondary-world adventure with plenty of exciting action, surprising twists, and wonderful payoffs to small seeds skillfully laid throughout the story.”
– Lightspeed Magazine

“I must confess that I tore through this instalment, and I’m really looking forward to the next one.”
– Sci-Fi and Fantasy Reviews

“I am so glad to say that this book lived up to my pretty high expectations perfectly. I loved it. Detan is back and just as cocky as ever.”
– Ever the Crafter

“Break the Chains is a fantastic follow up to Steal the Sky. This is what anticipating a new fantasy series should feel like!”
– The Conversationalist

“An excellent sequel to the excellent Steal The Sky.”
– Reading Trance

Megan O'Keefe lives in the Bay Area of California and makes soap for a living. (It’s only a little like Fight Club.) She has worked in arts management and graphic design, and spends her free time tinkering with anything she can get her hands on. She is a first place winner in the Writers of the Future competition, vol. 30.