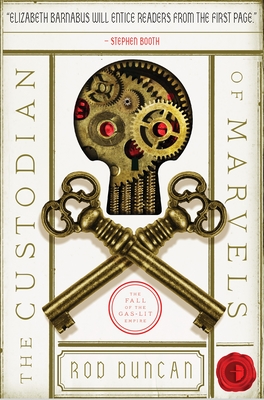 You’d have to be mad to steal from the feared International Patent Office. But that’s what Elizabeth Barnabus is about to try. A one-time enemy from the circus has persuaded her to attempt a heist that will be the ultimate conjuring trick.

Hidden in the vaults of the Patent Court in London lie secrets that could shake the very pillars of the Gas-Lit Empire. All that stands in Elizabeth’s way are the agents of the Patent Office, a Duke’s private army and the mysterious Custodian of Marvels.

Rod Duncan returns with the climactic volume ofThe Fall of the Gas-Lit Empire, the breathtaking alternate history series that began with the Philip K. Dick Award-nominated The Bullet-Catcher’s Daughter.

“Looking for a good book?  This is it: The Custodian of Marvels, by Rod Duncan.  You’ll want to read the first two books in the series, but this is a series that will amaze and delight.  And just like the Bullet-Catcher who tries to misdirect your attention, there’s a lot going on here and you will want to pay attention.”
– Looking for a Good Book

“Rod Duncan’s writing is a joy because his pseudo late-Victorian narrative runs along the smooth rails of a framework powered by an invisible, but well-oiled word engine that hums away in the background making sure the reader gets all the thrills and spills while retaining a good sense of the story as it relentlessly barrels along.”
– Strange Alliances

Praise for The Fall of the Gas-Lit Empire series:

“Rod Duncan’s The Bullet Catcher’s Daughter is a magic box pulsating with energy. Compulsive reading from the get-go, the blend of steampunk alternate history wrapped in the enigma of a chase makes for first-rate entertainment in this finely crafted novel.”
– Graham Joyce, author of Year of the Ladybird

“Steeped in illusion and grounded in an alternative history of the Luddite Rebellion, Duncan’s strong supernatural mystery serves ably as both a standalone adventure and the start to a series…Strategically placed steampunk tropes inform but do not overwhelm Elizabeth’s headlong quest to find a missing aristocrat sought by the Patent Office, which is fixated on both achieving perfection and eliminating “unseemly science.” A hazardous border crossing into the permissively corrupt Kingdom of England and Southern Wales provides ample excitement, and a glossary at the novel’s conclusion hints enticingly at a much more involved story to come.”
– Publishers Weekly

“I was completely caught up in her adventure and her plight. I think steampunk readers and fantasy/sci-fi readers will enjoy this one, so I’m recommending it for them even though (and to some extent because) its use of steampunk is a bit different. I found it to be a refreshing change from more formulaic steampunk novels.”
– Popcorn Reads

“The Bullet Catcher’s Daughter is an entertaining book that has some genuine, original touches combined with a clever story and even cleverer characters.”
– SF Book Reviews

“Rod Duncan is a genius and his Fall of the Gas-Lit Empire series will be much read and discussed for years to come.”
– Looking for a Good Book