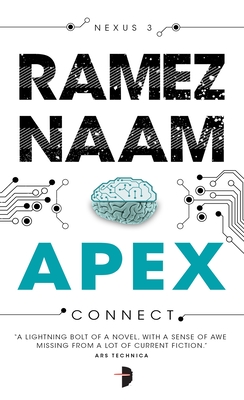 The Explosive Conclusion to Nexus and Crux

Global unrest spreads through the US, China, and beyond. Secrets and lies set off shockwaves of anger, rippling from mind to mind. Riot police battle neurally-linked protestors. Armies are mobilized. Political orders fall. Nexus-driven revolution is in here.

Against this backdrop, a new breed of post-human children are growing into their powers. And a once-dead scientist, driven mad by her torture, is closing in on her plans to seize planet's electronic systems, and re-forge everything in her image.

A new Apex species is here. The world will never be the same.

Praise for the Neuxs series:

"One of the Best Books of the Year"
- NPR

"Provocative... A double-edged vision of the post-human."
- The Wall Street Journal

"A lightning bolt of a novel, with a sense of awe missing from a lot of current fiction."
- Ars Technica

"Starred Review. Naam turns in a stellar performance in his debut SF novel... What matters here is the remarkable scope and narrative power of the story."
- Booklist

"A gripping piece of near future speculation... all the grit and pace of the Bourne films."
- Alastair Reynolds, author of Revelation Space

"The most brilliant hard SF thriller I've read in years. Reminds me of Michael Crichton at his best."
- Brenda Cooper, author of The Creative Fire

"Naam displays a Michael Crichton-like ability to explain cutting-edge research via the medium of an airport techno-thriller."
- SFX Magazine

"The only serious successor to Michael Crichton."
- Scott Harrison, author of Archangel

His novels has been nominated for the Kitscie Award for Best Debut, the Prometheus Award, and the Arthur C. Clarke Award. He is a 2014 nominee for the John W. Campbell Award for Best New Writer.
Loading...
or
Not Currently Available for Direct Purchase