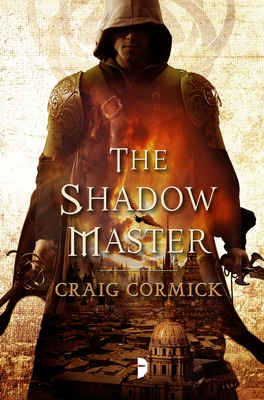 In a land riven with plague, inside the infamous Walled City, two families vie for control: the Medicis with their genius inventor Leonardo; the Lorraines with Galileo, the most brilliant alchemist of his generation.

And when two star-crossed lovers, one from either house, threaten the status quo, a third, shadowy power – one that forever seems a step ahead of all of the familial warring – plots and schemes, and bides its time, ready for the moment to attack...

Praise For The Shadow Master…

“The Shadow Master is one of the best written books that I have come across in a long time when you look at the narration and writing style that Craig Cormick uses it is just impossible to let this book down for just a few minutes. The whole idea behind the story of The Shadow Master again is something that I haven’t encountered in a long while, yes I read fairy tale adaptations but a retelling of Romeo and Juliet wasn’t something that I had dared to imagine. And lets above all not forget the ever presence of two of histories most adapt inventors: Da Vinci and Galileo. Pretty cool and Craig Cormick really knows how to build the right setting for the occasion. I have high hopes for the sequel.”
– The Book Plank

“What I did not expect when I first read the synopsis for this novel was Cormick’s dark sense of humor. This is a story filled with assassins, murders, kidnappings, and both graphic and unsettling visuals. But even in some of the darkest parts of the book I found myself laughing out loud. I guess if I would have to make up a genre for The Shadow Master it would be called acid grimdark.”
– Avid Fantasy Reviews

“I recommend you to read The Shadow Master, a story that takes an adventure where love is the key for everything; happiness, justice, revenge, and always does what is better for the everyone. Read of a land lost to diseases and a battle for power where there is more than just two adversaries but much more hidden in the shadows.”
– Open Book Society

CRAIG CORMICK is an award-winning author and science communicator. He has published over a dozen books – short story collections, novels and non-fiction – with both independent and mainstream publishers. He includes amongst his greatest writing junkets being a writer in residence at the University of Science in Malaysia, and receiving an Antarctic Arts Fellowship to travel to Antarctica – where, against expectations, he did not uncover any secret Nazi bases.
Loading...
or
Not Currently Available for Direct Purchase