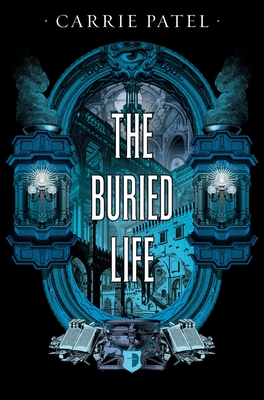 The gaslight and shadows of the underground city of Recoletta hide secrets and lies. When Inspector Liesl Malone investigates the murder of a renowned historian, she finds herself stonewalled by the all-powerful Directorate of Preservation – Recoletta’s top-secret historical research facility.

When a second high-profile murder threatens the very fabric of city society, Malone and her rookie partner Rafe Sundar must tread carefully, lest they fall victim to not only the criminals they seek, but the government which purports to protect them. Knowledge is power, and power must be preserved at all costs…


Praise For The Buried Life: Recoletta Book 1 (The Recoletta #1)…

“The Buried Life is a dark, imaginative steampunk gem – tailor-made for mystery fans and history nerds alike, with plenty of cops-and-robbers to keep you on your toes. This is a very fine contribution to the genre.”
– Cherie Priest, author of Boneshaker and Maplecroft

“With Regency-era sensibilities and Agatha Christie’s flair for the subtle conundrum, Patel’s debut novel introduces readers to a subterranean city of the future, centuries after what is dubbed ‘The Catastrophe’, and beautifully manages the delicate balance between entertainment and social commentary. The subtly fantastical story is resplendent with surprisingly deep villains, political corruption, and a gripping whodunit feel.”
– Starred Review, Publishers Weekly

“The Buried Life excels on many levels, quite apart from its presentation of strong female characters: it’s a cracking whodunnit with sufficient twists and turns to make Agatha Christie proud, a vivid portrayal of a vibrant multicultural society, and an intriguing love story.”
– The Guardian

“Fans of steampunk alternate histories will enjoy this book, and I suspect that readers of the lighter end of the dystopian genre will too. It’s quick, filled with enjoyable characters, and contains enough socio-political reflectiveness to give you something to chew on. It’s a great debut effort, and, even better, the first in a series.”
– Barnes and Noble

“Vaguely steampunk-ish but not quite classifiable, The Buried Life is recommended for readers comfortable straddling the border of fantasy and sci-fi; dedicated fantasists and hard sci-fi fans may want to go down another hole.”
– Books, Brains, and Beer

“The worldbuilding in The Buried Life is absolutely fantastic and Patel weaves together a universe that’s as grand as it is provocative. Patel is etching out traces of our own civilization from a future perspective, a cultural excavator carving out the recesses, digging up fossils that reveal both the geography of a collapsed United States as well as the intellectual debris of censorship. The Buried Life had me digging deeper, gawking at the literary stakes involved.”
– Peter Tieryas, author of United States of Japan

“This was a really interesting book. To me it was like the love child of a Steampunk and a Dystopian. Seriously. The setting was fascinating — an underground city, a group of rulers that are more dictators than anything, societal rules, and, of course, murder and mayhem. This book took off running. It was fast paced with a hell of a lot of action — which, coupled with the setting, was right up my alley. And on top of the murders and guns and all that, there were also some interesting characters. The main characters here were all quite fascinating — nuanced, layered, realistic. The world and the characters were fascinating, the plot was fast-paced and action-packed. It was a great read.”
– In Case of Survival

“Patel’s voice is her own. I was impressed.  Patel’s debut novel is definitely worth reading.”
– Bookish

“This was a very well written novel. Attention to the logic of not only writing but writing a detective novel was superb. Behind this detecting logic there lurks an obvious perpetrator but you always seem to know that that would be too easy. The fun is in determining the who, and seeing if subsequent events play out in your favor. I like a novel that challenges you AND gives you enough information to figure it out. I loved this novel and look forward to Ms. Patel’s next.”
– Koeur’s Book Reviews

“The Buried Life is one of those books where you get much more than you had bargained for. Carrie Patel introduces the reader to a very interesting world, which besides several explanations only raises many more questions. The whole setting of the book is cleverly build by mixing up several of the established genres, Carrie Patel has created a very unique and intriguing blend. The Buried Life is a high recommendation, you don’t come by these types of books very often, great reading stuff.”
– The Book Plank

“Carrie Patel has conceived of a dark steampunk-esque yet futuristic world filled with anachronisms that, despite that, work well together. It’s as if this world has been cobbled together from past cultures and times, which is not as unusual as it may sound, to make for an underground claustrophobic world that you can almost feel pressing down on your head and soul. And there’s a library to die for – what bookaholic could resist? I know I couldn’t and I hope you won’t either. This is Book #1 in a new series and I’m really looking forward to Book #2!”
– Popcorn Reads

“I really enjoyed the novel, Patel’s descriptions are strong and evoke Recoletta quite clearly. The narrative builds up to a clear climax…I can’t wait to return to Recoletta. If you enjoy your SFF a bit off the beaten path or genre mashups in general, then I highly recommend giving Carrie Patel’s The Buried Life a shot.”
– A Fantastical Librarian

“While the story begins as a routine mystery, it quickly develops into something else entirely, and the tone drops more and more often into a darker mood…I think the worldbuilding was my favourite aspect of the book. The story sets up a promising storyline and an interesting world, and I’ll be curious to see how the things develop in the city of Recoletta.”
– Bookaneer

“One of the best mystery novels I have ever read.”
– Avid Fantasy Reviews

“This is one of the fastest paced books I’ve read in a long time. Patel wastes no time with excessive description or extraneous scenes, but still manages to convey a full sense of the world and its underlying implications. The stakes are always clear, transitioning effortlessly from scene to scene, and I found the story impossible to put down. Fans of fast-paced narratives should definitely give this one a look. The ending is perfectly set up, but only in retrospect: I didn’t see it coming, and the world is left completely upturned. In short, The Buried Life is a fantastic start to Carrie Patel’s new series, and this one is going straight onto my ‘Buy Sequel Immediately Upon Release’ list.”
– Fantasy Book Critic

“This was a lovely debut and it made for a nice easy read. I’d definitely recommend it as something a little different; a mixture of crime and steampunk, something new from Angry Robot and well worth a read!”
– Uncorked Thoughts

“While the murder mystery is tied up nicely, providing a pleasant sense of closure to that part of the book, there are larger events that take over towards the end and set up the stage nicely for the follow-up… I for one will be eagerly waiting to download it to my Kindle on the day of release!”
– Ravenous Reader

“Her writing exudes an engaging confidence that makes The Buried Life hard to put down. Patel also shows a gift for pithy dialogue, and her two female leads are both resilient although in different ways”.
– SciFi Now

“This worldbuilding reminds me of a taste of China Mieville’s New Crobuzon, a dose of the scheming Universities in Paul McAuley’s Confluence novels, and an air and aura of mystery and thriller in the bargain.  A gaslight quasi Victorian underground city, though, in the end, is something new under the sun, and having two female protagonists as our leads and views into the city even more so. Patel gets high marks for trying to bring something new, and wandering the boundary of science fiction and fantasy to do it.”
– Skiffy and Fanty

“The Buried Life is a bracing and accessible read, full of nicely honed turns of phrase and entertaining banter.”
– Christopher East

“A very interesting novel that’s very promising indeed, and certainly should put Carrie Patel on that list of authors who readers will be looking forward to seeing what she can come up with next.”
– The Fictional Hangout

“I loved The Buried Life.  I enjoyed learning about Patel’s world and the culture of this underground city.  I honestly could not figure out the “whodunnit” and had no idea who was the murderer until the characters figured it out at the end.  For me that’s a huge plus.”
– Book Girl’s BookNook

“A tightly-written, fast-paced and very good novel that will scratch both your mystery itch and your post-apocalyptic dystopia itch.”
– Dreaming About Other Worlds

Carrie Patel was born and raised in Houston, Texas. An avid traveller, she studied abroad in Granada, Spain and Buenos Aires, Argentina.

She completed her bachelor’s and master’s degrees at Texas A&M University and worked in transfer pricing at Ernst & Young for two years.

She now works as a narrative designer at Obsidian Entertainment in Irvine, California, where the only season is Always Perfect.

You can find Carrie online at www.electronicinkblog.com and @Carrie_Patel on Twitter.
Loading...
or
Not Currently Available for Direct Purchase