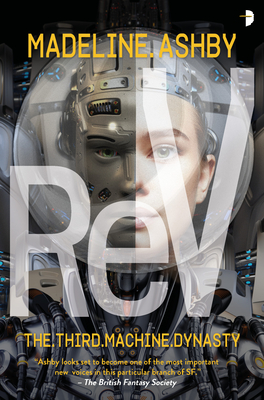 In the third and final installment of the Machine Dynasty, the rapture for which the self-replicating humanoid vN were engineered finally comes to pass. Now that the failsafe that once kept vN from harming humans has been hacked, all vN are discovering the promise – and the peril – of free will. Her consciousness unleashed across computer systems all across the world, the vicious vN Portia stands poised to finally achieve her lifelong dream of bringing humanity to its knees. The old battle between her and her grand-daughter Amy comes to its epic conclusion in the war for the very systems that keep the planet running. Can Amy get her family to the stars before Portia destroys every opportunity for escape and freedom?

MADELINE ASHBY is a science fiction writer, strategic foresight consultant, and immigrant living in Toronto. She writes a column for the Ottawa Citizen. Her short fiction has appeared in Nature, FLURB, Tesseracts, Imaginarium, and Escape Pod. Her other essays and criticism have appeared at BoingBoing, io9, WorldChanging, Creators Project, Arcfinity, and Tor.com.

“vN is a clever book with a wonderful ending by a writer who is well versed in AI technology, who can evoke sympathy with a few well-turned phrases and tells a satisfyingly complex story.”
– The Guardian

“Ashby intelligently and brutally explores the way people are willing to abuse, devalue and destroy any form of consciousness they’re able to define as ‘other’, while the robots challenge the limits of love, devotion and life after death.”
– Toronto Globe & Mail

“The world that Ashby envisions is fascinating, filled with strange ideas, nifty technology, and some rather mature implications.”
– Tor.com

"It’s perfect that this is coming out from Angry Robot, because these are some pretty angry robots."
– Amazing Stories

“vN fuses cyberpunk with urban fantasy to produce something wholly new. There’s a heavy kicker in every chapter. Zombie robots, vampire robots, robots as strange and gnarly as human beings. A page-turning treat.”
– Rudy Rucker, author of the Ware Tetralogy

“With an excellent grasp of her subject matter and much to say within the genre, Ashby looks set to become one of the most important new voices in this particular branch of SF, and I for one shall be awaiting her next book with great interest. Download to your system at the earliest opportunity.”
– The British Fantasy Society

“vN is a striking debut, one part tech thriller and one part adult fairy story … The best sci-fi not only entertains but also educates and informs, and vN manages all three effortlessly.”
– The Eloquent Page

“vN is an excellent book, carefully thought out, in a world that could be our future with only a few technological breakthroughs. The plot is believable and gripping, with a surprising ending. It was impossible to put down.”
– The Geek Syndicate
or support indie stores by buying on
Copyright © 2020 American Booksellers Association