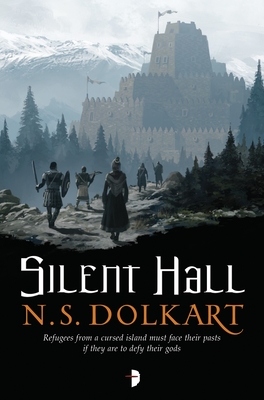 After their homeland is struck with a deadly plague, five refugees cross the continent searching for answers. Instead, they find Psander—a wizard whose fortress is invisible to the gods and who is willing to sacrifice anything and anyone to keep the knowledge of the wizards safe.

With Psander as their patron, the refugees cross the mountains and brave the territory of their sworn enemies. They confront a hostile ocean and even traverse the world of the fairies in search of magic powerful enough to save themselves—and Psander’s library—from the wrath of the gods. All they need to do now is rescue an imprisoned dragon and unleash a primordial monster upon the world . . . And how hard could that be?

“Silent Hall is very nearly a perfect novel. I wish my first book had been anywhere near as inventive and challenging to the norm.”
– James A Moore, author of the Seven Forges series

“This is a very special debut novel. The quality of writing takes this tale way beyond a simple fantasy adventure.”
– Strange Alliances

“An excellent debut from a new author. What a lush world of magics and peoples, gods, and dragons. What’s more, the author set it all in a patriarchal world, yet delivers some rather feminist notions in a very organic way. Likewise, there are nuggets about racism and even domestic violence, but done so subtly and woven in so smoothly that they don’t stand out as such. They just blend in to make a much rounder story that has a lot more to say than the typical medieval-patriarchy fantasy. A delightful surprise, and cleverly done.”
– Women of Badassery

“I believe any fan of epic fantasy, or anyone who just like a well written, focused character driven story,  will enjoy this book. If you’re big into Anthony Ryan’s Blood Song series, Michael Sullivan’s Ryiria series, Tim Marquitz’s Blood War series, or Jeff Salyard’s Bloodsounder’s Arc series, then this book should be a must read for you.”
– The Bookwyrm Speaks

“Reading Silent Hall, I was impressed by just how well thought out and paced the narrative was. As a first novel, this is supremely good book.”
– Misanthropester

“N S Dolkart’s debut novel, Silent Hall, is an epic fantasy adventure that explores new ground with a reluctant band of adventurers and really captures the reader’s attention.”
– Looking for a Good Book

“Silent Hall wages a war between selfish gods and a band of wanderers, whose strained friendship is their greatest weapon. The reader has no opportunity to lose interest in this tale.”
– Cowering King

“A great, mythological sort of story that brings all of high fantasy’s good stuff to the table without having all that Good Ol’ Boy fantasy nonsense of its genre predecessors from the 90s and early 2000s.“
– Jasmine Gower, author of Moonshine

“Dolkart did a great job of switching between his characters, and I felt their pain when they were faced with trials.“
– A Man for All Seasons

“Epic fantasy at its most divine.“
– Sean Grigsby

nsdolkart.wordpress.com
twitter.com/N_S_Dolkart
Loading...
or support indie stores by buying on