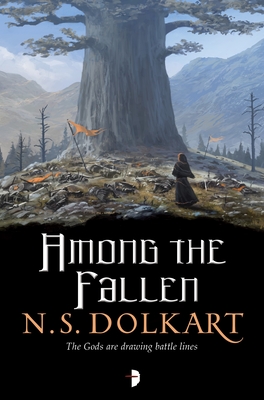 In wake of the battle of Silent Hall, the city of Ardis is reeling, its leaders frightened and disorganized. The remaining oracle of the god Ravennis has resurfaced there and is spreading a new gospel—one in which Ravennis is the new Lord of the Underworld. Narky is swept up in the promotion of his religion, even while the prevailing church of Magor tries to put down its upstart rivals.

In the meantime, Criton and Bandu discover a community of Dragon Touched that has survived in hiding, and with Criton’s leadership, they begin a campaign to retake their former territories with the power of God Most High at their backs.

Left to their own devices, Phaedra and Hunter go on a quest to rediscover the secrets of academic wizardry. But they soon discover that all five islanders are needed to prevent a true worldwide catastrophe. If only Criton and Narky weren't already on opposing sides of a regional war . . .

Praise For Among the Fallen (Godserfs #2)…

“I am constantly surprised how a new author can bring a creative world into the light of the written word and unfold a competent and entertaining novel. Really astounding, as it reads like an accomplished author that has been writing for many years. GET THIS!”
—Koeur’s Book Reviews

“Once again N S Dolkart has achieved an epic tale with an intimate feel because, despite the vast topographical and conceptual canvas, you experience the characters’ needs, emotions and concerns.”
—Strange Alliances

“True and rewarding fantasy at its best.”
—Morpheus Tales

Praise and Reviews for the Godserfs series:

“Silent Hall is very nearly a perfect novel. I wish my first book had been anywhere near as inventive and challenging to the norm.”
—James A. Moore, author of The Last Sacrifice

“This is a very special debut novel. The quality of writing takes this tale way beyond a simple fantasy adventure.”
—Strange Alliances

“An excellent debut from a new author. What a lush world of magics and peoples, gods, and dragons. What’s more, the author set it all in a patriarchal world, yet delivers some rather feminist notions in a very organic way. Likewise, there are nuggets about racism and even domestic violence, but done so subtly and woven in so smoothly that they don’t stand out as such. They just blend in to make a much rounder story that has a lot more to say than the typical medieval-patriarchy fantasy. A delightful surprise, and cleverly done.”
—Women of Badassery

“I believe any fan of epic fantasy, or anyone who just like a well written, focused character driven story,  will enjoy this book. If you’re big into Anthony Ryan’s Blood Song series, Michael Sullivan’s Ryiria series, Tim Marquitz’s Blood War series, or Jeff Salyard’s Bloodsounder’s Arc series, then this book should be a must read for you.”
—The Bookwyrm Speaks

“N S Dolkart’s debut novel, Silent Hall, is an epic fantasy adventure that explores new ground with a reluctant band of adventurers and really captures the reader’s attention.”
—Looking for a Good Book

“Silent Hall wages a war between selfish gods and a band of wanderers, whose strained friendship is their greatest weapon. The reader has no opportunity to lose interest in this tale.”
—Cowering King

“A great, mythological sort of story that brings all of high fantasy’s good stuff to the table without having all that Good Ol’ Boy fantasy nonsense of its genre predecessors from the 90s and early 2000s.”
—Jasmine Gower, author of Moonshine

“Epic fantasy at its most divine.”
—Sean Grigsby, author of the Smoke Eaters series

nsdolkart.wordpress.com
twitter.com/N_S_Dolkart
Loading...
or
Not Currently Available for Direct Purchase