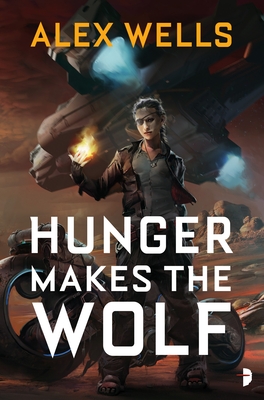 This thrilling sci-fi Western features “a dash of Dune, a bit of Fury Road, and a whole lot of badass female characters” (Emma Maree Urquhart, author of Dragon Tamers)

The strange planet known as Tanegawa’s World is owned by TransRifts Inc, the company with the absolute monopoly on interstellar travel. Hob landed there ten years ago, a penniless orphan left behind by a rift ship. She was taken in by Nick Ravani and quickly became a member of his mercenary biker troop, the Ghost Wolves.

Ten years later, she discovers that the body of Nick’s brother out in the dunes. Worse, his daughter is missing, taken by shady beings called the Weathermen. But there are greater mysteries to be discovered—both about Hob and the strange planet she calls home.

Praise For Hunger Makes the Wolf (The Ghost Wolves #1)…

“While the backdrop may be arid and dusty, Alex Well’s debut is lush with ideas, characters and invention. A story of chosen families, the different battlefields we choose and that are chosen for us and what it means to be more or less than human, Hunger Makes The Wolf does the near impossible; takes a sub genre that was looking largely played out and uses it as the foundation stone for something new, rich and strange.”
– Winner of The Kitschies’ Golden Tentacle Award for Best Debut 2017

“Gritty and engrossing, I definitely want Hob on my side when the revolution comes.”
– Mur Lafferty, John W Campbell Award-winning author of The Shambling Guide to New York City

“It has a wonderful weird west vibe and some of the phrasing is simply delicious. Hob is a wonderful character to follow – hers is a solid journey and I got a bit choked up when Hob stood up for what she wanted. Alex crafts a host of fascinating characters here – the Weathermen, the Bone Collector – and I reckon you’re going to love their adventures.”
– E Catherine Tobler, author of the Folley & Mallory Adventures

“Take a dash of Dune, a bit of Fury Road, and a whole lot of badass female characters and you’ve got Hunger Makes the Wolf – a really, really bloody awesome debut from Alex Wells.”
– Emma Maree Urquhart, author of Dragon Tamers

“This thing drips with tension – between characters, within the story itself – that makes it impossible to put down. I needed to know what would happen next, what would Hob do. Tanegawa’s World may be a desolate and uninviting terrain, but it provides fertile ground for the characters,who truly blossom on the page.”
– Shana DuBois for B&N Sci-Fi & Fantasy Blog

“It’s a science fiction Western thriller, and it is great, and I’m really, intensely, eagerly looking forward to the sequel. This is the sort of thing I really like. UP WITH THIS SORT OF THING.”
– Liz Bourke, for Tor.com

“Hunger Makes the Wolf is an exhilarating ride that makes you think, with characters who practically demand rereading. If you care about genre, or labor rights, or female friendships, or having a really good time with a book, read it.”
– Strange Horizons

Alex Wells is a writer, geologist, and sharp-dressed sir. They’ve had short stories in Strange Horizons, Lightspeed, Daily Science Fiction, Shimmer, and more. Alex is a host on the popular Skiffy and Fanty podcast, where they talk about movies and other nerdy sci-fi and fantasy things.