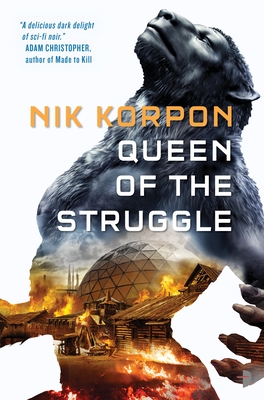 When freedom is brutally withheld, the people have no choice but to rise up, in this post-apocalyptic science fiction sequel to The Rebellion’s Last Traitor

Overthrowing the tyrannical Tathadann government should have been cause for celebration. But as Eitan City announces its independence, soldiers from the northern province of Vårgmannskjør storm the ceremony and annex the city. The cruelties of the Tathadann soon pale beside their new rulers' atrocities.

Henraek finds himself resettled in the north, in a city where the people seem happy and well…  until its labor camps and enslaved spirits come to light. The rebellion must begin anew, in Eitan City and throughout Vårgmannskjør, and now the stakes are higher than ever.

NIK KORPON is the author of several books, including The Soul Standard and Stay God, Sweet Angel. He lives in Baltimore with his wife and two children.

Praise For Queen of the Struggle (Memory Thief #2)…

Praise for the Memory Thief Trilogy

“Nik Korpon’s The Rebellion’s Last Traitor is a mesmerizing mix of post-apocalyptic F/SF, war/adventure, criminals dealing in memories, and black-as-hell noir. It’s full of attitude and atmosphere, and I couldn’t put it down.”
– Paul Tremblay, author of A Head Full of Ghosts and Disappearance at Devil’s Rock

“The Rebellion’s Last Traitor is an explosive tale of betrayal and revenge in which allegiances prove as dangerous and unreliable as the memories the citizens of Eitan City buy and sell. Korpon crosses genre lines with ease, and imbues this post-apocalyptic tale with the rhythm and immediacy of crime fiction.”
– Chris Holm, Anthony Award-winning author of Red Right Hand and The Killing Kind

“Soldiers and memory. Memory thieves. What you can and can’t recall, what you wish could forget, what you wish you had back. Nik Korpon takes you there and back, in writing as fine as I’ve seen and with a story you’ll remember.”
– Stephen Graham Jones, author of Mongrels

“The Rebellion’s Last Traitor is a delicious dark delight of sci-fi noir, with an atmosphere that virtually drips from every page and an ingenious story that will hook you from the very start.”
– Adam Christopher, author of Made to Kill

“Dark but compelling, with a plot that pulls you into turning page after page needing to know what happens next.”
– Jena Brown Writes

“A sharp and clever novel that manages to discuss difficult themes without ever being sneaky about it.”
– Dead End Follies

“A layered, smart novel that has something in it for just about any reader. 10/10”
– Pen Boys Review

“‘Reach off the page and grab you’ characters and brutally intricate world building… a well paced, challenging read.”
– SFF World

“A fun and interesting take on the aftermath of a rebellion and what might cause a new one to rise up.”
– The Bibliotaph

“With ‘reach off the page and grab you’ characters and brutally intricate world building, this isn’t a book you can multi-task with. To get all you can from it you need to give it your full attention, and it is worth it.”
– SFF World

“Stay God, Sweet Angel is what happens when a story breaks loose from its moorings, burrows into the reader’s psyche, and lives there, throbbing like the delirious ghost of William S. Burroughs.”
– Rayo Casablanca, author of 6 Sick Hipsters and Very Mercenary

“The pop culture apocalypse is now, and Nik Korpon is one of its darkest new voices.”
– Anthony Neil Smith, author of Hogdoggin’ and All the Young Warriors
or
Not Currently Available for Direct Purchase
Copyright © 2020 American Booksellers Association