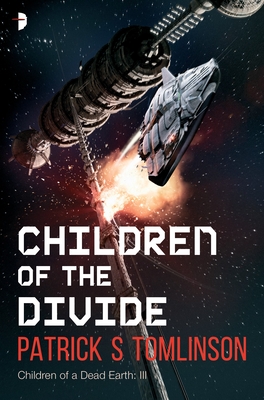 No matter how far humanity comes, it can’t escape its own worst impulses in this far-future science fiction thriller from the author of The Ark

A new generation comes of age eighteen years after humanity arrived on the colony planet Gaia. Now threats from both within and outside their Trident threaten everything they’ve built.

The discovery of an alien installation inside Gaia’s moon, terrorist attacks, and the kidnap of a man’s daughter stretch the community to its breaking point, but only two men stand a chance of solving all three mysteries before the makeshift planetary government shuts everything down.

“An absolutely shining example of using SF to hold a mirror up to our own society… one of the most powerful tools of science fiction, and Tomlinson wields it here like both a scalpel and a shotgun.”
– Strange Currencies

“An interesting sci-fi novel with analogies to current events, Children of the Divide is intriguing and fun with memorable characters and situations.”
– The Bibliotaph

“A thrilling entry in the series. 4.75/5 stars”
– The Mad Professah Lectures

PRAISE FOR THE CHILDREN OF A DEAD EARTH SERIES

“There is so much good stuff wrapped inside The Ark: a locked-room murder mystery, bare-knuckle action, and the kind of hard-boiled science fiction that will make your brain pop. Climb aboard...”
Adam Rakunas, author of Windswept

“This is the story I wish I had written. Generation ship. Detective story. Tomlinson takes such discordant elements and weaves them into a fascinating story: a Manet painting, advanced probes, exoplanet imaging, and more. I’m hoping that this is the start of a new subgenre: detectives in space!”
J Daniel Batt, author of Young Gods: A Door Into Darkness

“Another amazing story with all the twists and turns I’ve come to expect from Patrick S. Tomlinson.  With a great mix of science fiction, action and mystery it is wonderfully written and it’s not “world” building but as the author said it’s ‘race building’,  so don’t miss out on the turbulent ups and downs that had me undeniably hooked throughout the entire thing.”
– Books in Brogan

“A solid read, and one I definitely recommend.”
– Strange Currencies

“I could not put Trident’s Forge down, and read it in one marathon sitting. That is as much due to the writing style and characters as the non-stop, nail-biting story thread. If you’re an outer space sci-fi geek like I am, you’re going to love this series!”
– Popcorn Reads

Patrick S Tomlinson is a man of many hats. In addition to writing sci-fi novels and shorts, he prowls theaters, clubs, and bars throughout the Midwest performing as a stand-up comedian. Between gigs, cons, and rewrites, he works as a pundit and frequent political contributor, with columns appearing in publications such as The Hill and The New York Times. In the little downtime remaining, Patrick enjoys hobbies such as motorcycling, model-building, shooting, and training for half marathons. He lives in Milwaukee, WI with his fiancee, two cats, a bearded dragon, a 2008 Bullitt Edition Mustang, and a Triumph Thruxton R.