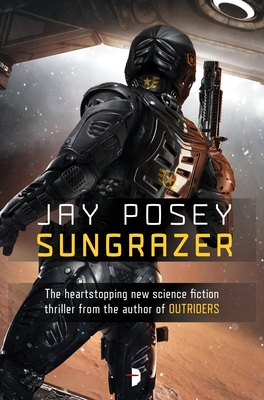 In a new Cold War between Earth and the colonies on Mars, when devastating weapons go missing, there’s only one team you can call: the Outriders. A crack force of highly specialized super-soldiers, their clone bodies are near-immortal.

When a fully autonomous vessel with orbital strike capabilities goes missing, it’s up to the Outriders to track the untrackable. But when the trail leads them to the influential Martian People’s Collective Republic, the operation gets a lot more complicated . . .

“Exciting and brilliant . . . This is the best military SF series I have read.”
—A Book Drunkard

“Fans of series like The Expanse should eat this up, as well as those already familiar with the series.”
—Just A Guy That Likes To Read

“This enjoyable military science fiction adventure about a crack black ops outfit that gets to do all the ‘mission impossible’ jobs, assisted by some scarily effective technical toys, is smoothly written with a nicely twisty plot.”
—Brainfluff

“This is why I read sci-fi books.”
—Purple Owl Reviews

“This is Bond for the modern age and with an ensemble cast.”
—Online Eccentric Librarian

“This military science fiction adventure once more hooked me in with yet another enthralling plot in a story where the stakes aren’t just cities or countries sucked into war and devastation, but planets.”
—SF Reader

Jay Posey is a narrative designer, author, and screenwriter by trade. He started working in the video game industry in 1998, and has been writing professionally for over a decade. He’s spent around eight years writing and designing for Tom Clancy’s award-winning Ghost Recon and Rainbow Six franchises. Jay has lectured at conferences, colleges, and universities, on topics ranging from basic creative writing skills to advanced material specific to the video game industry.