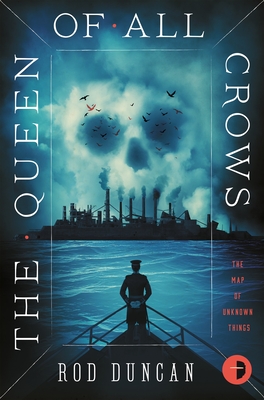 The Queen of All Crows (Map of Unknown Things #1)

The year is 2012. The nations of the world are bound together in an alliance of collective security, overseen by the International Patent Office, and its ruthless stranglehold on technology.

When airships start disappearing in the middle of the Atlantic, the Patent Office is desperate to discover what has happened. Forbidden to operate beyond the territorial waters of member nations, they send spies to investigate in secret.

One of those spies is Elizabeth Barnabus. She must overcome her dislike of the controlling Patent Office, disguise herself as a man, and take to the sea in search of the floating nation of pirates who threaten the world order.

“I absolutely loved The Queen of All Crows. It’s a gripping alternative history adventure set in an intriguing world. Among the fast-paced plot twists the novel also provides keen insights into power structures, particularly when it comes to gender roles as social constructs. Elizabeth Barnabus is possibly my favourite steampunk main character ever: resourceful, fearless, unusually observant and emotionally intelligent. I was thrilled to follow her to the ends of the world as a reader.”
—Emmi Itäranta, award-winning author of Memory of Water

“The Queen of all Crows is a smart and entertaining read, among the best of the steampunk subgenre I’ve read. It continues the story of Elizabeth Barnabus in an alternative history where they take intellectual property protection a little too seriously.”
—Craig Newmark, founder of Craigslist and Craigconnects

“Let’s get this out of the way: The Queen of All Crows is an excellent book, full stop. Duncan has managed to infuse the world of the Gas-Lit Empire, and the character of Elizabeth Barnabus herself, with a new jolt of life, color, and depth. Clear your schedule, because you won’t want to stop reading this until you’ve finished, and then you’ll want more.”
—Eric Scott Fischl, author of The Trials of Solomon Parker

“Some authors really find a groove in their series where each new book is more enjoyable than the last. But Rod Duncan has done even better with The Queen Of All Crows: he’s taken the Gas Lit Empire series into a completely new direction that is both wonderful and wondrous.”
—Surreal Tavi

“It has all the makings of a classic read that will endure for centuries.”
—Adjunct Thoughts

“Everything has been built into the story to ramp up the tension (and the page turning), creating a delicious anxiety in the reader who needs a stiff drink at the end of it all.”
—Strange Alliances

“I found the story fascinating.”
—Journey of a Bookseller

“I liked this novel even more than I liked the previous series… There’s adventure, pirates, lots of women, great characters and a smart main character. What else do I need to say? I recommend this novel highly!”
—Naty’s Bookshelf

“It seems an odd mix of steampunk, supernatural mystery, and intellectual property thriller, but I like it.”
—Black Gate