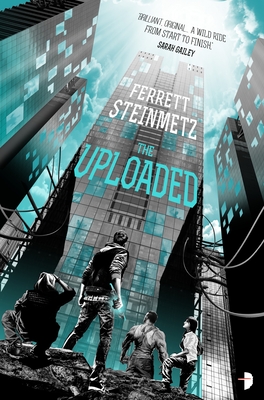 Life sucks and then you die... a cyberpunk family drama from the ingenious author of Flex.

In the near future, the elderly have moved online and now live within the computer network. But that doesn’t stop them interfering in the lives of the living, whose sole real purpose now is to maintain the vast servers which support digital Heaven. For one orphan that just isn't enough – he wants more for himself and his sister than a life slaving away for the dead. It turns out that he's not the only one who wants to reset the world...

Ferrett Steinmetz is a graduate of both the Clarion Writers' Workshop and Viable Paradise, and has been nominated for the Nebula Award. Ferrett has a popular blog, The Watchtower of Destruction, where he talks about bad puns, relationships, politics and videogames.

Praise For The Uploaded…

“Steinmetz has crafted a brilliant, original world in this all-too-possible story of life, death, and legacy. The Uploaded is a wild ride from start to finish, and asks the reader to examine what exactly it is that they are leaving behind — and what they’re headed toward.”
– Sarah Gailey

“I’ve said it before and I’ll say it again: this guy should be a super-bestseller. There’s no good excuse why he isn’t. I’m a total fanboy because he’s just got the writing chops to pull just about anything off.”
– Brad K Horner

“A great standalone with exceptional world building. Books like this are why I read science fiction: huge ethical questions, dark not entirely unfamiliar worlds and massive concepts. A great book, and definitely one that will have me searching out Steinmetz’s back catalogue.”
– Moon Magister Reviews

“If you enjoy dystopian science fiction reads with plenty of action, then I recommend this one.”
– Brainfluff

“Steinmetz is a clever writer indeed. He has hidden an examination of one of mankind’s biggest questions (what happens when you die?) in a novel filled with plenty of action, snarky characters, and a lovable pony sidekick.”
– Speculative Chic

“I pretty much love everything I’ve read from Ferrett Steinmetz, and The Uploaded is no exception.”
– Pop Culture Beast

“A great standalone with exceptional world building. Books like this are why I read science fiction: huge ethical questions, dark not entirely unfamiliar worlds and massive concepts.”
– Lord Belatiel

“In the grand tradition of thoughtful future science fiction that comments on our present, it’s as pointed a social satire as you’re likely to find this side of the Upterlife.”
– Barnes & Noble Sci-Fi & Fantasy Blog

“It has a really interesting idea behind it and world and characters are fun. So give it a try.”
– Being a CFO

“It’s over-the-top. It’s funny, moving, tragic, and eventually triumphant, though at high cost for all the characters. It’s cleverly and skilfully written.”
– The Review Curmudgeon
or
Not Currently Available for Direct Purchase
Copyright © 2020 American Booksellers Association