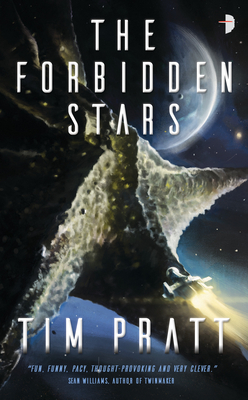 Book III of the Axiom

The ancient alien gods are waking up, and there's only one spaceship crew ready to stop them, in this dazzling space opera sequel to The Wrong Stars and The Dreaming Stars.

Aliens known as the Liars gave humanity access to the stars through twenty-nine wormholes. They didn’t mention that other aliens, the ancient, tyrannical – but thankfully sleeping – Axiom occupied all the other systems. When the twenty-ninth fell silent, humanity chalked it up to radical separatists and moved on. But now, on board the White Raven, Captain Callie and her crew of Axiom-hunters receive word that the twenty-ninth colony may have met a very different fate. With their bridge generator they skip past the wormhole, and discover another Axiom project, fully awake, and poised to pour through the wormhole gate into all the worlds of humanity…

Tim Pratt is a Hugo Award-winning science fiction and fantasy author, and has been a finalist for World Fantasy, Sturgeon, Stoker, Mythopoeic, and Nebula Awards, among others. He is the author of over twenty novels, most recently The Deep Woods and Heirs of Grace, and scores of short stories. His work has been reprinted in The Best American Short Stories, The Year's Best Fantasy, The Mammoth Book of Best New Horror, and other nice places. Since 2001 he has worked for Locus, the magazine of the science fiction and fantasy field, where he currently serves as senior editor. He lives in Berkeley, CA with his wife and son.

Praise For The Forbidden Stars: Book III of the Axiom…

“The engaging, inclusive, and entertaining Axiom series, may be his best work yet… witty, heartfelt sci-fi romp.”
– Tor.com

"Pratt’s high-tech universe of tangled alien half-truths and hidden motivations provides a fascinating setting for a gripping series that has plenty of room for future surprises."
– Publishers Weekly

Praise for the Axiom series

“Brilliantly fun space opera that reminds me of Killjoys but with more Weird Alien Cool Shit.”
– Liz Bourke for Locus

“The Dreaming Stars is fast and tense, with excellent dialogue, funny banter (much of it either graveyard humour or concerned with how much Callie and Elena are into each other), and characters who feel like real people. It has the atmosphere of pulp space opera, and a gleeful approach to the big ideas (and the big furniture) of science fiction. I really enjoyed it, and I hope Pratt has the opportunity to write many more novels in this setting.”
– Locus Magazine

“The engaging, inclusive, and entertaining Axiom series, may be his best work yet… witty, heartfelt sci-fi romp.”
– Tor.com

“What can I say, if you liked The Wrong Stars, you’ll like The Dreaming Stars, I know I did. Four out of five stars.”
– Divine Nanny

“The Dreaming Stars is a note-perfect sequel to The Wrong Stars, with all the best aspects of the previous novel, showing that science fiction can still be fun while also being progressive.”
– Occasionally Random Book Reviews

“The Dreaming Stars may lack the manic buzz that defined its predecessor, but its steadiness inspires confidence that this series is built to last.”
– The 1000 Year Plan

“The Wrong Stars was a brilliantly pulpish space opera romp, filled with compelling characters, weird alien tech, great banter, and more explosions than you could shake a stick at. It was good enough that I’ve been waiting impatiently for the sequel ever since. It’s a piece of great good fortune, then, that The Dreaming Stars is every bit as much fun as its predecessor.”
– Locus

“A character-driven, banter-rich space opera with a great take on alien civilisations and 'Big Dumb Objects'… I’m keeping my fingers crossed for Pratt’s space opera to become a fixture of my reading calendar for the foreseeable future. ”
– Nerds of a Feather

“A tense action-packed thriller where everyone, particularly the dynamic and thinking-out-of-the-box Callie, has to somehow stay one step ahead of the technologically advanced Axiom and the type of games they play to conquer every lifeform they meet. The ending is indeed an interesting one.”
– Strange Alliances