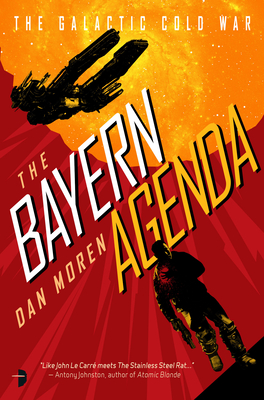 The Galactic Cold War, Book I

A new Cold War threatens the galaxy, in this fast-paced and wisecracking thriller of spies and subterfuge.

Simon Kovalic, top intelligence operative for the Commonwealth of Independent Systems, is on the frontline of the burgeoning Cold War with the aggressive Illyrican Empire. He barely escapes his latest mission with a broken arm, and vital intel which points to the Empire cozying up to the Bayern Corporation: a planet-sized bank. There’s no time to waste, but with Kovalic out of action, his undercover team is handed over to his ex-wife, Lt Commander Natalie Taylor. When Kovalic’s boss is tipped off that the Imperium are ready and waiting, it’s up to the wounded spy to rescue his team and complete the mission before they’re all caught and executed.

Praise For The Bayern Agenda: The Galactic Cold War, Book I…

"A wisecracking caper that nevertheless doesn’t skimp on the details and human cost of interstellar war, like John Le Carré meets The Stainless Steel Rat. Moren is one to watch."
– Antony Johnston, creator of Atomic Blonde and The Coldest Winter

"Hypercool. It’s like the Golden Age of sci-fi got an upgrade, with all the big honking space cannons and some desert planet dry humour thrown in for the bargain."
– John Birmingham, author of the Axis of Time series

"...one of the most entertaining genre mashups within an astronomical unit.﻿"
–  Publishers Weekly

"Ocean’s Eleven in zero gravity, served up with heart and humor. Not to be missed!”
– Helene Wecker, author of The Golem and the Jinni

"The Aleph Extraction races to a rewarding and unexpected conclusion – I stayed up until 2am to finish it in one sitting!"
– TJ Berry, author of Space Unicorn Blues

DAN MOREN is a novelist, freelance writer, and prolific podcaster. A former senior editor at Macworld, his work has appeared in the Boston Globe, Macworld, Popular Science, Yahoo Tech, and many others. He co-hosts tech podcasts Clockwise and The Rebound, writes and hosts nerdy quiz show Inconceivable!, and appears on the award-winning The Incomparable. Dan lives with his wife in Somerville, Massachusetts, where he is never far from a set of polyhedral dice.

dmoren.com
twitter.com/dmoren
Loading...
or
Not Currently Available for Direct Purchase