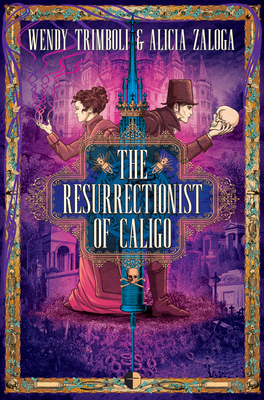 The Resurrectionist of Caligo

With a murderer on the loose, it’s up to an enlightened bodysnatcher and a rebellious princess to save the city, in this wonderfully inventive Victorian-tinged fantasy noir.

“Man of Science” Roger Weathersby scrapes out a risky living digging up corpses for medical schools. When he’s framed for the murder of one of his cadavers, he’s forced to trust in the superstitions he’s always rejected: his former friend, princess Sibylla, offers to commute Roger’s execution in a blood magic ritual which will bind him to her forever. With little choice, he finds himself indentured to Sibylla and propelled into an investigation. There’s a murderer loose in the city of Caligo, and the duo must navigate science and sorcery, palace intrigue and dank boneyards to catch the butcher before the killings tear their whole country apart.

Praise For The Resurrectionist of Caligo…

"This is first and foremost a thoroughly entertaining novel…  The convincing setting, engaging characters and an artfully devised plot all combine to give these particular fantasy themes a vivid freshness."
– Juliet E. McKenna for Interzone Magazine

"The Resurrectionist of Caligo plays with genre in an intriguing and clever way. There are horror elements mixed with fantasy, colonial critique, and class commentary, all blended into a book that is a pleasure to read.﻿"
– Tor.com

"I loved the characters, the world-building, the tight plot and the emotional payoff. One of my favorites of the summer!"
– Patrice Sarath, author of The Sisters Mederos and Fog Season

"A striking portrayal of the society from the gutters to the royal palace, as gaudy and vivid as a Hogarth print in its writing about the underbelly of society and living there. The characters were utterly human, trying to do their best in a world which was far from perfect, and the conclusion left me wanting more."
– Genevieve Cogman﻿, author of  The Invisible Library

"The world of Resurrectionist is tantalisingly real, the prose is breathlessly witty, and the characters are impossible to avoid loving (or loathing, in a few noteworthy cases). If you've ever called yourself a goth, played 7th Sea, or wished that Pride & Prejudice had magical ink-bees in it, you need this book."
– Tyler Hayes, author of The Imaginary Corpse

"Trimoboli and Zaloga skillfully deliver a debut that uses alchemy to combine scientific logic, magical elements, and a whodunnit that gives off Sherlock Holmes-ian, gaslamp vibes. The novel is artfully written from dual perspectives but with one fluid style, and will appeal to readers of sf, fantasy, and historical mystery, or those who just can't choose﻿."
– BookList

“Wendy Trimboli and Alicia Zaloga build their world with meticulous care, and the plotting is rich and cunning…a story and characters to savour, in a world painted in vivid detail.”
– SFX Magazine

"Sells itself on a single sentence."
– B&N Sci Fi and Fantasy Blog

ALICIA ZALOGA grew up in Virginia Beach not liking the beach, and now moves every few years, sometimes to places near beaches. She has a writing degree from Columbia College Chicago, and when she’s not dealing with life’s chores, she collects hobbies: plucking the E string on the bass, producing an alarming number of artistic doodles, and French beading floral bouquets.

WENDY TRIMBOLI grew up in England, Germany and the United States, and learned to speak two languages well enough that most people can understand her. Determined to ignore her preference for liberal arts, she attended the US Air Force Academy then worked as an intelligence officer, which was less exciting than it sounds. These days she has a creative writing MFA from Vermont College of Fine Arts, and lives in Colorado with her family, border collie, and far too many books.
Loading...
or
Not Currently Available for Direct Purchase