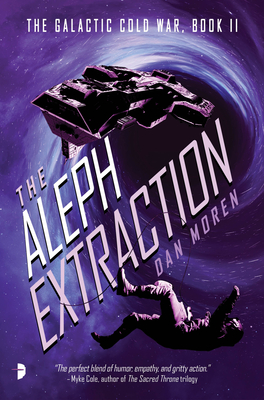 Aboard a notorious criminal syndicate's luxurious starliner, Commonwealth operative Simon Kovalic and his crew race to steal a mysterious artifact that could shift the balance of war...

Still reeling from a former teammate's betrayal, Commonwealth operative Simon Kovalic and his band of misfit spies have no time to catch their breath before being sent on another impossible mission: to pull off the daring heist of a quasi-mythical alien artifact, right out from under the nose of the galaxy's most ruthless crime lord.

But their cold war rivals, the Illyrican Empire, want the artifact for themselves. And Kovalic's newest recruit, Specialist Addy Sayers, is a volatile ex-con with a mean hair-trigger who might put the whole mission at risk. Can Kovalic hold it all together, or will the team tear themselves apart before they can finish the job?

“A witty, fast-paced thriller that doesn’t skimp on its characters, The Aleph Extraction adds a heist-flavored spin to Moren’s clever interstellar Cold War spycraft. The result is Ocean’s Eleven in zero gravity, served up with heart and humor. Not to be missed!”
– Helene Wecker, author of The Golem and the Jinni

"It’s easy to root for these ragtag, quick-thinking underdogs as they stand up to intergalactic bullies big and small. Readers will end this installment deeply attached to Moren’s bold characters and eagerly anticipating what comes next."
– Publishers Weekly, starred review

“Moren delivers another thrill ride. Grabbed me from the first chapter and didn’t let go.”
– Michael Mammay, author of Planetside

“The perfect blend of humor, empathy, and gritty action, Dan Moren is one of the most exciting voices to enter the literary world in a long time.”
– Myke Cole, author of The Sacred Throne trilogy

"Fresh and engaging. No one blends fun and thrill quite like Dan Moren."
– Jay Posey author of Outriders

"Moren latest entry in the Galactic Cold War series, The Aleph Extraction, ratchets up the action, tension, and wit ... the interstellar heist caper you didn't know you needed, but not to be missed."
– Eric Scott Fischl, author of Dr. Potter's Medicine Show

"A brilliant heist with a dynamic cast. Everything I was looking for in a spy novel!"
– Reese Hogan author of Shrouded Loyalties

"Moren ably plays with trope and archetype to bring new life and new dimensions to the tried-and-true Heist Plot, but the best action is found around the kitchen table and other quiet places where the characters come together. Major Simon Kovalic and his covert-ops team of misfits come together at their broken places, and their bond is stronger and more realistic for it."
– RWW Greene, author of The Light Years

“A witty, fast-paced thriller that doesn’t skimp on its characters, The Aleph Extraction adds a heist-flavored spin to Moren’s clever interstellar Cold War spycraft. The result is Ocean’s Eleven in zero gravity, served up with heart and humor. Not to be missed!”
– Helene Wecker, author of The Golem and the Jinni

"The Aleph Extraction is a delightful story of found family wrapped around an edge-of-your-seat space heist. It’s a worthy successor to The Bayern Agenda, but you don’t need to have read the first book before jumping into this one... The Aleph Extraction races to a rewarding and unexpected conclusion – I stayed up until 2am to finish it in one sitting!"
– TJ Berry, author of Space Unicorn Blues

“Swap out the old Soviet Union for the Illyrican Empire, the Bayern Corporation for Spectre, and Simon Kovalic’s KO gun for Bond’s trusty Walther PPK and you’ve got yourself one of the most entertaining genre mashups within an astronomical unit.”
– Publishers Weekly

“A twist-laden caper of intrigue and improv filled with dark humour and, uh, surprisingly engaging galactic economics… A wisecracking caper that nevertheless doesn’t skimp on the details and human cost of interstellar war, like John Le Carré meets The Stainless Steel Rat. Moren is one to watch.””
– Antony Johnston, creator of Atomic Blonde and The Exphoria Code

“The Bayern Agenda is exactly the dose of intergalactic espionage you need. Action, humor, and pathos, wrapped up in a plot that Le Carré would be proud of … Moren is one to watch.”
– Eric Scott Fischl, Author of Dr. Potter’s Medicine Show

“Hypercool. It’s like the Golden Age of sci-fi got an upgrade, with all the big honking space cannons and some desert planet dry humour thrown in for the bargain.”
– John Birmingham, author of the Axis of Time series

“The action scenes, both on the ground and in space, show a focus on thoughtful planning and careful pacing. The characterization delves just enough into emotionality to give the characters realism without moving the focus away from fights, intrigue, and spycraft.”
– Publishers Weekly

“A great spy story, with tidbits of science explaining the intergalactic travel and even a hint of romance to come.”
– Booklist

DAN MOREN is a novelist, freelance writer, and prolific podcaster. A former senior editor at Macworld, his work has appeared in the Boston Globe, Macworld, Popular Science, Yahoo Tech, and many others. He co-hosts tech podcasts Clockwise and The Rebound, writes and hosts nerdy quiz show Inconceivable!, and appears on the award-winning The Incomparable. Dan lives with his wife in Somerville, Massachusetts, where he is never far from a set of polyhedral dice.

https://dmoren.com
http://twitter.com/dmoren
Loading...
or
Not Currently Available for Direct Purchase