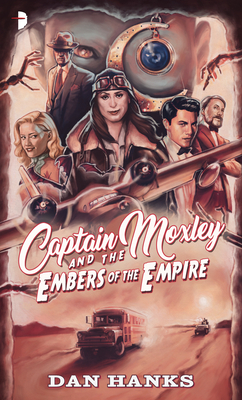 Captain Moxley and the Embers of the Empire

An ex-Spitfire pilot is dragged into a race against a shadowy government agency to unlock the secrets of the lost empire of Atlantis...

In post-war 1952, the good guys are supposed to have won. But not everything is as it seems when ex-Spitfire pilot Captain Samantha Moxley is dragged into a fight against the shadowy US government agency she used to work for. Now, with former Nazis and otherworldly monsters on her trail, Captain Moxley is forced into protecting her archaeologist sister in a race to retrieve two ancient keys that will unlock the secrets of a long-lost empire - to ensure a civilisation-destroying weapon doesn't fall into the wrong hands. But what will she have to sacrifice to save the world?

Praise For Captain Moxley and the Embers of the Empire…

"It's a giddy, white-knuckled ride to the very end.”
– R.W.W. Greene, author of The Light Years

"So cinematic, you can taste the buttered popcorn."
– S.A. Sidor, Fury from the Tomb

"Move over Indiana Jones, Captain Moxley has arrived and she won’t ask you twice!"
– Amanda Bridgeman, author of The Subjugate

"Can a book at once beg for a prequel as much as a sequel?"
– Chris Panatier, author of The Phlebotomist

"Buckle up and enjoy the ride!"
– Michael J. Martinez, author of The Daedalus Incident

"Hanks forces us to suspend reality, embrace the chaotic ride and revel in the fun-factor."
- Nils Shukla, Fantasy Hive

"Rolls along at break-neck pace...like a novelisation of a hit movie you never saw"
- Starburst Magazine

Dan is a writer, editor, and vastly overqualified archaeologist who has lived everywhere from London to Hertfordshire to Manchester to Sydney, which explains the panic in his eyes anytime someone asks "where are you from?". Thankfully he is now settled in the rolling green hills of the Peak District with his human family and fluffy sidekicks Indy and Maverick, where he writes books, screenplays and comics.
Loading...
or
Not Currently Available for Direct Purchase