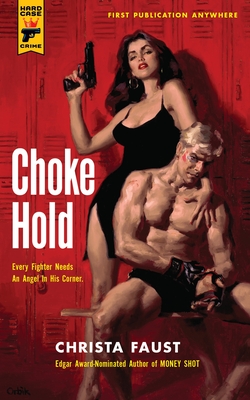 INSIDE THE WORLD OF MIXED MARTIAL ARTS - AND MURDER...

When a former co-staris gunned down, it's up to Angel to get his son, a hotheaded MMA fighter, safely through the unforgiving Arizona desert, shady Mexican bordertowns, and the seductive neon mirage of Las Vegas...

“The sex industry, bodybuilding drugs, and basic revenge make for a potent cocktail in this eye-popping follow-up to Faust’s Edgar Award nominee. She’s Hard Case Crime’s only female author, and her tough heroine is a welcome addition to the gritty pulp tradition. Snap it up...” - Library Journal

"She’ll get you turning pages faster than a wrestler on ‘roids." - Bizarre Magazine

The First Lady [of Hard Case Crime] is certainly earning her stars and stripes in the crime fiction world. - We Love This Book

An astounding novel... funny, heartbreaking, violent and sexy, Choke Hold has everything you’d wish for in a thriller. - Guilty Conscience Review

Christa Faust is a successful horror and crime writer. Her most recent novelMoney Shot for Hard Case Crime won the Crimespree Award and was nominated for several others, including the prestigious Edgar Award.

She has written tie-ins to Friday the 13th, A Nightmare on Elm Street and theTwilight Zone amongst others. She lives in Los Angeles, California, and loves vintage shoes and noir cinema.
Loading...
or support indie stores by buying on