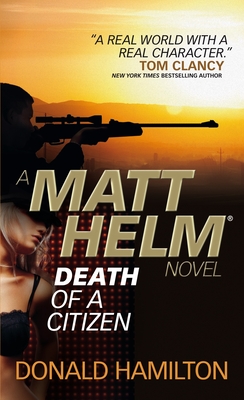 Matt Helm - Death of a Citizen

Matt Helm, one-time special agent for the American government during the Second World War, has left behind his violent past to raise a family in Santa Fe, New Mexico. When a former colleague turns rogue and kidnaps his daughter, Helm is forced to return to his former life as a deadly and relentless assassin.

Originally released in the era of the James Bond novels, these novels have been out of print and unavailable for almost 20 years. They were considered grittier and more realistic than Bond, garnering them critical praise and an ardent audience.

Donald Hamilton is the creator of Matt Helm, star of 27 novels that have sold more than 20 million copies worldwide. He was born in Uppsala, Sweden, attended the University of Chicago, and served in the U.S. Naval Reserve. His writing career began in 1946 with short stories for Collier's and The Saturday Evening Post. His first novel was Date With Darkness, published in 1947, and altogether he published 38 novels. The first Matt Helm novel, Death of a Citizen, was originally published in 1960, at the height of the Cold War.
Loading...
or
Not Currently Available for Direct Purchase