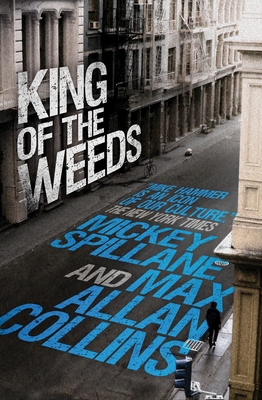 King of the Weeds

"HE WAS THE KILLER AND I WAS THE TARGET.”

It should be a mellow time for America’s toughest PI. He and Velda are planning their nuptials, and Captain of Homicide Pat Chambers is nearing retirement. Then an assassin’s bullet almost brings Mike down on his office doorstep. Could the attempted hit have anything to do with the impending release of a serial killer put away by Mike and Pat? There’s also the small matter of the $89 billion in Mafia money stashed in a cave, in a location known only to Hammer. With everyone from wiseguys to the US Government on his tail,  Mike must prove that he is just as sharp, and deadly, as ever.

Mickey Spillane is the legendary crime writer credited with igniting the explosion of paperback publishing after World War II as a result of the unprecedented success of his Mike Hammer novels. Spillane's novels sold tens of millions of copies - I, The Jury went through more than 60 paperback printings in 1947 alone. In 1995, he was named a Grand Master by the Mystery Writers of America. Before his death at the age of 88 in 2006, Spillane chose long-time friend Max Allan Collins to complete his unfinished work and act as his literary executor.

Max Allan Collins is the bestselling, award-winning author of Road to Perdition, the graphic novel that inspired the Oscar-winning movie starring Paul Newman and Tom Hanks, and of the acclaimed Nathan Heller series of historical hardboiled mysteries. Also a filmmaker himself, Collins' films include the documentary Mike Hammer's Mickey Spillane.

Praise For Mike Hammer: King of the Weeds…

"The plot feels very modern and I can see this being a movie.  A nice Bloody Mary and a Old-Fashioned up pairs well when reading “King of the Weeds.” - Retrenders

"Comes to an exciting conclusion and the final page of the story does not dissappoint. A  great ending to an intriguing tale that keeps the reader guessing." - Geek Hard

"For fans of the detective true crime genre, King of the Weeds will be right up your alley. Max Allan Collins does a superb job of channelling the voice that Spillane used in all of his Hammer novels." - City of Films

"Tremendously engaging and impossible to put down." - Comic Book Resources

"pure hard boiled...books like this are why I started reading crime fiction"  - Crimespree Magazine


"Collins has remained faithful to the original style of Spillane with a Mike Hammer who is much older in age but just as hard boiled as ever. "King of the Weeds" is a great addition to the series. - Midwest Book Review
or
Not Currently Available for Direct Purchase
Copyright © 2020 American Booksellers Association