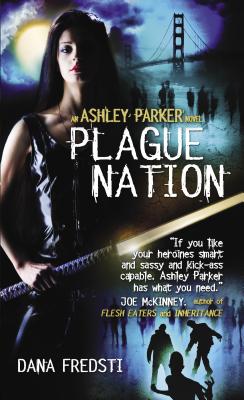 Ashley Parker was a ordinary woman who was also a “wild card,” immune to the emerging zombie plague, drawn unwillingly into a shadowy paramilitary organization. Having been ambushed in San Francisco, which is now fully engulfed in the zombie plague, Ashley and the wild cards must pursue the enemy to San Diego. There they will discover adark  organization which seeks to weaponize the plague. But that isn't the worst news. The plague itself has gone airborne, making it transferable without physical contact. It cannot be controlled by anyone, so reports of the zombie swarm are coming in from across the United States - and across the world.

“If you like your heroines smart and sassy and kick ass capable, Ashley Parker has what you need.  And Plague Nation is exactly what the zombie genre needed." – Joe McKinney, Stoker Award-winning author of Flesh Eaters and Inheritance


"A cool, hip zombie apocalypse novel. With crisp writing, a cast of memorable characters, and tons of undead combat action, it’s a zombie lover’s literary dream. When the dead rise, I’ll want the wild cards by my side."– Roger Ma, author of The Zombie Combat Manual

One of the Top Ten Zombie Releases of 2012— BarnesAndNoble.com

“A gruesomely good read that has me panting for the next book in the series. As hard to put down as a swarm of zombies. When's the next one? – Kat Richardson, bestselling author of the Greywalker novels

“Fredsti’s writing is razor sharp as her heroes fight off the horde while fighting their attraction for each other.” – Stacey Graham, author of The Zombie Dating Guide

“Plague Town is a fast-moving zombie tale that reads like a blast of energy. If you like zombie apocalypse stories, this is a must read!” – Lois Gresh, New York Times Best-Selling Author of Blood and Ice and Eldritch Evolutions

Dana Fredsti is the Bay Area-based author of Plague Town and Murder for Hire: The Peruvian Pigeon. A past president of the professional organization Sister in Crime, she has also appeared in various zombie/horror movies projects, and worked on Sam Raimi's Army of Darkness as an armourer's assistant, sword-fighting captain, and sword-fighting Deadite.
Loading...
or
Not Currently Available for Direct Purchase