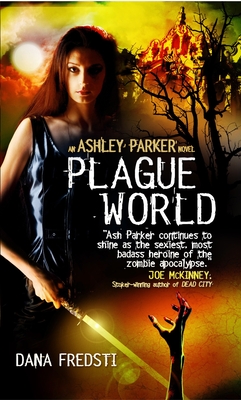 The thrilling conclusion of the zombie apocalypse begun in PLAGUE TOWN and continued in PLAGUE NATION! The zombie plague has gone airborne, and the conspiracy that began it all reaches the boiling point.

Having been ambushed in San Francisco, which is now fully engulfed in the zombie plague, Ashley and the wild cards must pursue the enemy to San Diego. There they will discover a splinter of their own organization, the Dolofónoi tou Zontanoús Nekroús, which seeks to weaponize the plague. But that isn't the worst news. The plague has gone airborne, making it transferable without physical contract. It cannot be controlled by anyone, so reports of the zombie swarm are coming in from across the United States - and across the world.

"It’s an over-the-top idea featuring a smartass protagonist and it elicits profoundly painful emotions with poignant prose as it takes us to some of the darkest, most uncomfortable places one can visit via the escapism of reading fiction" - Ravenous Monster

“This book had some of the craziest scenes and moments that I’ve ever seen in a zombie book. I definitely loved reading this.” - Books of Love

"This is an action packed book that rarely slows down." - Drunken Zombie

"I would say that if you’re down with delicious zombie gore (poor choice of words, I know), romance, and a lot of really thrilling adventure, definitely check out Fredsti’s Plague Town series. It’s the best zombie story I’ve encountered yet! Plus, the recently released conclusion Plague World had me reeling from the twists and one heart-wrenching finale!" - MuggleNet

"Dana Fredsti is a fantastic storyteller-you’ll blaze through this in one or two sittings, because the action rarely lets up, and it’s just good. If you’re a zombie fan, or just a fan of spectacular horror, this should be a go-to series, and I envy anyone that gets to read this series back to back. Plague World was worth the wait, though, and I’ll follow Dana Fredsti anywhere." - My Bookish Ways

"Fredsti is a strong writer with a clear concept of where she wants Ashley to start and end up. Much of the book feels personal and many of the characters are thought out enough to feel like family." - Fangirl Nation

"One of my favorite zombie series out there." - My Bookish Ways

"The Ashley Parker books are written with such zest and enthusiasm that they’re a lot of fun to read." - Shadowlocked

Dana Fredsti is a US-based author of Murder for Hire: The Peruvian Pigeon and co-author of What Women Really Want in Bed. She blogs frequently and has made podcast and radio appearances. She has also appeared in various zombie/horror movies projects, and worked on Sam Raimi's Army of Darkness as an armourer's assistant, sword-fighting captain, and sword-fighting Deadite.
Loading...
or
Not Currently Available for Direct Purchase