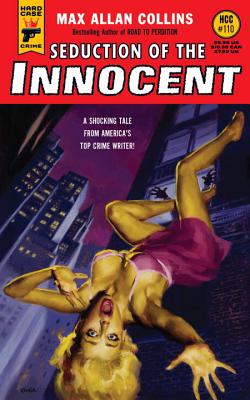 Seduction of the Innocent (Paperback)

It's 1954, and a rabble-rousing social critic has declared war on comic books - especially the scary, gory, bloody sort published by the bad boys of the industry, EF Comics. But on the way to a Senate hearing on whether these depraved publications should be banned, the would-be censor meets a violent end of his own - leaving his opponents in hot water.

Can Jack Starr, private eye to the funny-book industry, and his beautiful boss Maggie unravel the secret of Dr. Frederick's gruesome demise?  Or will the crackdown come, falling like an executioner's axe...?

Max Allan Collins is the bestselling, award-winning author of Road to Perdition, the graphic novel that inspired the Oscar-winning movie starring Paul Newman and Tom Hanks, and of the acclaimed Nathan Heller series of historical hardboiled mysteries. Also a filmmaker himself, Collins' films include the documentary Mike Hammer's Mickey Spillane.

Terry Beatty is the popular comic book and newspaper comic strip illustrator who, together with Max Allan Collins, created Ms. Tree, the longest-running private eye comic series in comics history. Beatty's work has also graced numerous other comics, including Batman, and has appeared in magazines such as Scary Monsters. Most recently he was named the newest illustrator of the long-running comic strip The Phantom, and collaborated with Max Allan Collins on the graphic novel Return to Perdition, sequel to Road to Perdition.

Praise For Seduction of the Innocent…

"Max Allan Collins blends fact and fiction like no other writer." - Andrew Vachss

"Collins makes it sound as though it really happened." - New York Daily News

"Few people alive today can tell a story better than Max Allan Collins. SEDUCTION OF THE INNOCENT is a great, page-turning read that is beautiful to look at and serves as another proud addition to the Hard Case Crime library." – Bookreporter

“A solid tale of crime, greed, and murder with a tasty dash of sequential art history in the mix.” – Fanboy Comics

“Everything I would ever want in a detective novel.” – Geek Hard

“When a book manages to keep me reading from beginning to end, I consider it a job well done, but when I sit there for hours on end reading because I can’t put it down, that’s when I consider a book truly good and Seduction of the Innocent falls happily in that second category.” – Geekenstein

“A fast read, hedged by a bevy of hilarious characters and culminating in a delicious ‘whodunit.’” – Noir Whale

“Any fan of noir, pulp fiction or comic books will appreciate Seduction of the Innocent.” – Pop Cults