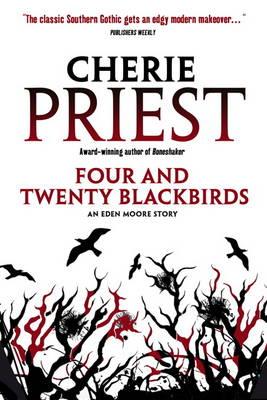 Although she was orphaned at birth, Eden Moore is never alone. Three dead women keep watch from the shadows, bound to protect her from the violence that took their lives a century ago. But in the woods a gunman waits, and Eden must pay for the sins of her great-grandfather or history may do far worse than repeat itself.

"Four and Twenty Blackbirds" was Cherie Priest's first novel, followed by "Wings to the Kingdom," and "Not Flesh Nor Feathers," completing her trilogy of Southern Gothic ghost stories featuring heroine Eden Moore. Priest is also the author of "Fathom," "Dreadnought" and "Boneshaker," which was nominated for a Nebula and Hugo Award, won the Locus Award for best science-fiction novel, and was named Steampunk Book of the Year by steampunk.com. Born in Tampa, Florida, Priest earned her master's in rhetoric at the University of Tennessee. She lives in Seattle, Washington, with her husband, Aric, and a fat black cat named Spain.
or
Not Currently Available for Direct Purchase
Copyright © 2020 American Booksellers Association