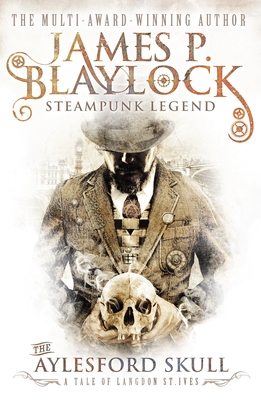 It is the summer of 1883 and Professor Langdon St. Ives - brilliant but eccentric scientist and explorer - is at home in Aylesford with his family. However, a few miles to the north a steam launch has been taken by pirates above Egypt Bay; the crew murdered and pitched overboard. In Aylesford itself a grave is opened and possibly robbed of the skull. The suspected grave robber, the infamous Dr. Ignacio Narbondo, is an old nemesis of Langdon St. Ives.

When Dr. Narbondo returns to kidnap his four-year-old son Eddie and then vanishes into the night, St. Ives and his factotum Hasbro race to London in pursuit...

The first new steampunk novel in over twenty years from one of the genre's founding fathers!

Praise For The Aylesford Skull…

"Blaylock is a magician!" - Michael Swanwick

"Blaylock is better than anyone else at showing us the magic that secretly animates our world..." - Tim Powers, author of On Stranger Tides

"While many recent novels have picked up the steampunk banner, this one fully delivers, offering action, farce, tender relationships, and prose full of genuine Victorian cadence and flavor." - Publishers Weekly [on The Affair of the Chalk Cliffs]

"St. Ives has to be one of the most fleshed out Victorian characters ever written, and I’m sincerely hoping that Blaylock isn’t finished with this scientist adventurer. The Aylesford Skull can easily stand alone without any knowledge of Blaylock’s previous steampunk stories, but you’ll want to hunt down additional St. Ives tales, I’m for certain." – Wired.com

James P. Blaylock is one of the founding fathers of modern steampunk along with fellow writers and friends Tim Powers and K.W. Jeter. He has won the World Fantasy and Philip K. Dick Awards. Blaylock lives in Orange, CA with his wife - they have two sons.
Loading...
or
Not Currently Available for Direct Purchase