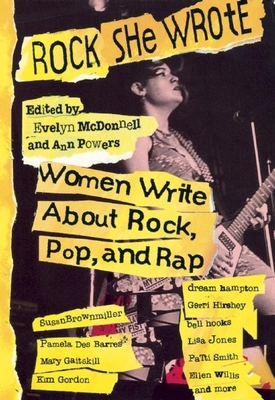 From London to Los Angeles, from the pages of New Musical Express to Rolling Stone, women have been writing about rock and pop music for more than 30 years. Rock She Wrote collects the best of women's writing on music from the 1960s to the present, from the days when women were only tolerated as screaming groupies behind the scenes to the day they took center stage as performers and critics in their own right. These vibrant, subversive, irreverent and often brilliant voices on the music of then and now tell the sidelined history of women in rock. Patti Smith (on Bob Dylan as a sex symbol) Marianne Faithfull, Caroline Coons (on The Sex Pistols) Patricia Kennealy Morrison (Rock around the Cock: My Life With and Without Jim Morrison), Kim Gordon (Boys Are Smelly: Sonic Youth Tour Diary), Riot Grrrls; just a few of the names who turn rock 'n' roll on its head in this provocative collection. The articles in Rock She Wrote bring together feminism and rock 'n' roll, the music of female self-discovery, the beats of liberation and power, and the intimate details of popular culture.

Evelyn McDonnell has been writing about popular culture and society for over 20 years. She's the author of Mamarama: A Memoir of Sex, Kids and Rock 'n' Roll, Army of She: Icelandic, Iconoclastic, Irrepressible Bjork, and Rent by Jonathan Larson. She has been the senior editor at The Village Voice and associate editor at SF Weekly and is currently assistant professor of journalism and new media at Loyola Marymount University. Her writing has appeared in the Los Angeles Times, Ms., Rolling Stone, The New York Times, Spin, Billboard, Vibe, and more. She lives in San Pedro, CA. Ann Powers has been writing about popular music and society since the early 1980s. She's the author of Weird Like Us: My Bohemian America and co-wrote the book Piece by Piece with musician Tori Amos. A former editor for The Village Voice and senior pop critic at The New York Times, she currently works for NPR Music, an online department of the public radio group. She lives in Alabama.
Loading...
or
Not Currently Available for Direct Purchase