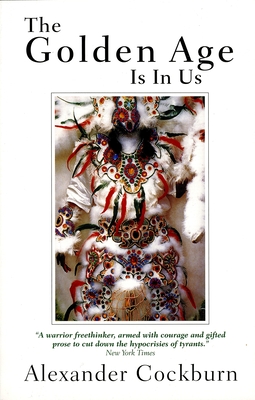 The Golden Age Is in Us

This volume is both a diary of a radical’s working life and a public chronicle of the recent political past. His own reflections are interspersed with letters from Graham Greene, personal friends and irate readers. There are discussions with Noam Chomsky, and pieces on criticism, Colette, transvestism, sexual manners and hate mail. Cockburn subverts some left totems along the way—satanic abuse, a JFK conspiracy, a Democratic White House—and demonstrates that there are few uncomplicated victims, the Bad Wolf lurks with Red Riding Hood. In his writing on the environment, the three-hour day and other topics, Cockburn also suggests that an age of uncertainty invites new ideas and new allegiances. The left must be utopian or it is nothing. From the Los Angeles riots to Ireland, from Gorbachev to Clinton—this is a history of an age of uncertainty.

Praise For The Golden Age Is in Us: Journeys and Encounters…

“A warrior freethinker, armed with courage and gifted prose to cut down on the hypocrisies of tyrants.”—New York Times Book Review

“Alexander Cockburn is the best radical-left journalist now writing in the U.S. with anything like a broad national and international audience.”—William Keach, Raritan Review

“He is a brilliant writer ... There are dozens of memorable passages far superior to H.L. Mencken in their power and their sense of humor.”—James Drew, Toledo Blade

“His account of conversations and meetings, ‘from the redwood forest to the gulfstream border,’ as we used to say, makes this book a vital narrative and would justify its price on their own ... This book will outlive the weird epoch it captures so tellingly.”—Christopher Hitchens, Financial Times

“In The Golden Age Is In Us Cockburn reveals an intimacy, warmth and tenderness,,, The book is, at the least, literate. It chronicles Cockburn’s view of everyday life. It reveals its doubts, affirmations, tyrannies, joys and sorrows and, more than that, reveals how his thought, in its amazing consistency, feeds into the culture and from it.”—Thom Jurek, Detroit Metro Times

“It's spontaneous, as though he exhaled prose. Perhaps it's simply that Cockburn is, after all, Irish. Anyway, it's a literary gem.”—George Scialabba, Village Voice

“Unusual and stimulating. An original mixture of diary entries over eight years. If it is a slightly surprising literary cocktail to find in the hands of so renowned a transatlantic Marxist, then the answer is that Alexander Cockburn has always been exceptional ... he possesses a genuinely enquiring mind combined with a real love of words.”—Anthony Howard, The Spectator

Alexander Cockburn co-edits CounterPunch with Jeffrey St. Clair. Together they have written Whiteout: The CIA, Drugs and the Press and A Dime’s Worth of Difference: Beyond the Lesser of Two Evils.
Loading...
or
Not Currently Available for Direct Purchase