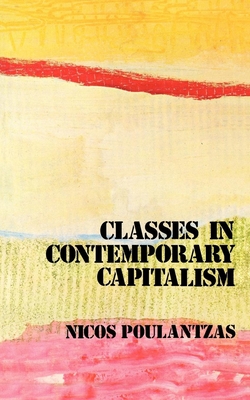 Nicos Poulantzas’s third major work is a pioneering survey of some of the most fundamental, yet least studied, aspects of the class structure of advanced capitalist societies today. The book starts with a general theoretical essay that for the first time seriously explores the distinction between the “agents” and “positions” of capitalist relations of production, and seeks to avoid the typical errors of either functionalism or historicism. It also provides a polemical reconsideration of the problem of the “nation state” as a political unit today, and its relationship to the internationalization of capital.

Finally, and most originally, Poulantzas develops a long and powerful analysis of the much-abused concept of the “petty-bourgeoisie.” In this, he scrupulously distinguishes between the “traditional” categories of petty-bourgeoisie—shopkeepers, artisans, small peasants—and the “new” categories of clerical workers, supervisors, and salaried personnel in modern industry and commerce. At the same time he demonstrates the reasons why a unitary conceptualization of their class position is possible. The difficult question of the definition of “productive” and “unproductive” labor within Marx’s own account of the capitalist mode of production is subjected to a novel and radical reinterpretation. The political oscillations peculiar to each form of petty-bourgeoisie and especially their characteristic reactions to the industrial proletariat, are cogently assessed.

Poulantzas ends his work with a reminder that the actions and options of the petty-bourgeoisie are critical to any successful struggle by the working class, which must secure the alliance of important sections of the petty-bourgeoisie if the fateful experience of Chile is not to recur elsewhere tomorrow. Combining empirical and theoretical materials throughout, Classes in Contemporary Capitalism represents a notable achievement in the development of Marxist social science and political thought.

Praise For Classes in Contemporary Capitalism…

“Poulantzas is one of the leading Marxist theorists of the modern capitalist state, and these are important essays which build on his earlier books. Highly recommended for graduate collections in social and political theory.”—Choice

“Poulantzas’s major arguments are very controversial and challenging. This is one of the most important recent Marxist contributions to class theory.”—Contemporary Sociology

“Poulantzas can be seen as writing in the tradition of Marx’s own work about France.”—Times Literary Supplement

Nicos Poulantzas was born in Athens in 1936 and died in Paris in 1979. His other published works include Political Power and Social Classes, Classes in Contemporary Capitalism, Fascism and Dictatorship and State, Power, Socialism.
Loading...
or support indie stores by buying on