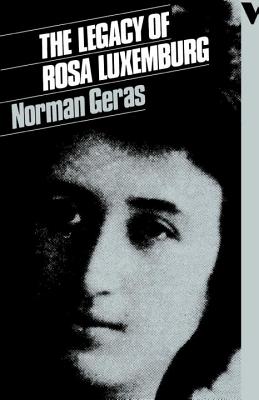 No great socialist thinker has been so often misrepresented as the Polish revolutionary Rosa Luxemburg. In this scrupulous study, tightly argued, Geras systematically considers and refutes the major myths which have developed about her work. He shows how her views on socialist strategy in Russia were closer to those of Lenin than any other leader, and clarifies her famous theory of the mass strike. Her critique of the Bolsheviks after the October Revolution is distinguished from social-democratic or anarchist attacks, to which it has often been assimilated.
Widely praised on its first publication, "The Legacy of Rosa Luxemburg" is an important contribution to our understanding of an earlier generation of Marxism in Poland and Russia.

“This is a useful and thoughtful book, in which the power and originality of Rosa Luxemburg’s thinking emerges.” —E H Carr, Times Literary Supplement

“Geras’s book is indispensable for a proper understanding of Luxemburg.” —Books and Bookmen

Norman Geras is Professor of Government at the University of Manchester. His books include "Solidarity in the Conversation of Humankind, Marx and Human Nature" and "The Legacy of Rosa Luxemburg."
Loading...
or support indie stores by buying on