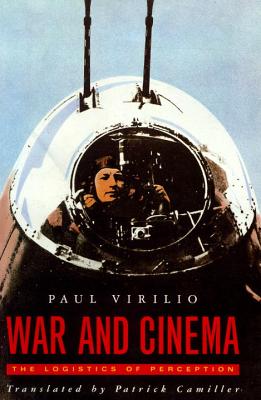 The Logistics of Perception

From the synchronised camera/machine-guns on the biplanes of World War One to the laser satellites of Star Wars, the technologies of cinema and warfare have developed a fatal interdependence. Hiroshima marked one conclusion of this process in the nuclear ‘flash’ which penetrated the city’s darkest recesses, etching the images of its victims on the walls.

Since the disappearance of direct vision in battle and the replacement of one-to-one combat by the remote and murderous son et lumiere of trench warfare, military strategy has been dominated by the struggle between visibility and invisibility, surveillance and camouflage. Perception and destruction have now become coterminous.

Paul Virilio, one of the most radical French critics of contemporary culture, explores these conjunctions from a range of perspectives. He gives a detailed technical jistory of weaponry, photography and cinematography, illuminating it with accounts of films and military campaigns. He examines in parallel the ideas of strategists and directors, along with views on war and cinema of writers from Apollinaire to William Burrroughs. And he finds further fruitful sources of reflection in the history of cinema architecture or the wartime popularity of striptease and pin-up.

The result is a rich and suggestive analysis for military ‘ways of seeing’, and a disturbing account of how these have now permeated our culture: ‘Warsaw, Beirut, Belfast ... the streets themselves have become a permanent film-set for army cameras or the tourist reporters of global civil war.’


Praise For War and Cinema: The Logistics of Perception…

“One of the most original thinkers of our time.”—Libération

Paul Virilio trained as an artist in stained glass, working with Braque and Matisse, as well as studying philosophy at the Sorbonne. In 1975 he was made director of the Ecole speciale d'architecture in Paris. He retired from teaching in 1998 and now works with private organizations on projects to house the homeless in Paris. He has written many books, including "War and Cinema, Open Sky," and "Ground Zero."

A translator from Romanian, Spanish, German, French, and Italian, Patrick Camiller has translated many works, including Dumitru Tsepeneag's "Vain Art of the Fugue," "The Necessary Marriage," and "Hotel Europa."
or
Not Currently Available for Direct Purchase