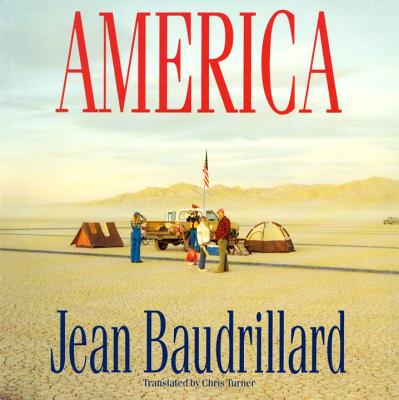 In this, his most accessible and evocative book, France’s leading philosopher of postmodernism takes to the freeways in a collection of traveler’s tales from the land of hyperreality.

“Since de Toqueville, French thinkers have been fascinated with America. But when it comes to mysterious paradoxes and lyrical complexity no French intellectual matches Jean Baudrillard in contemplating the New World... [He] has become a sharp-shooting Lone Ranger of the post-Marxist left.”—The New York Times

“A mixture of crazy notions and dead-on insights, America is a valuable (and voluble) picture of what Mr. Baudrillard calls ‘the only remaining primitive society’ ... ours.”—The New York Times Book Review

Jean Baudrillard (1929-2007) began teaching sociology at the Universite de Paris-X in 1966. He retired from academia in 1987 to write books and travel until his death in 2007. His many works include "Simulations and Simulacra," "America," "The Perfect Crime," "The System of Objects," "Passwords," "The Transparency of Evil," "The Spirit of Terrorism," and "Fragments," among others.
Loading...
or
Not Currently Available for Direct Purchase