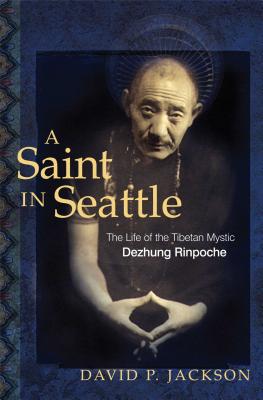 A Saint in Seattle (Paperback)

The Life of the Tibetan Mystic Dezhung Rinpoche

In 1960, the Tibetan lama Dezhung Rinpoche (1906-87) arrived in Seattle after being forced into exile from his native land by the Communist Chinese. Already a revered master of the teachings of all Tibetan Buddhist schools, he would eventually become a teacher of some of Western Buddhism's most notable scholars. This is the inspiring and unlikely biography of a modern buddha.

David P. Jackson received his doctorate in 1985 from the University of Washington and studied and translated for many years in Seattle for the polymath Tibetan scholar Dezhung Rinpoche. Until 2007, he was a professor of Tibetan Studies at Hamburg University in Germany and is now a curator for Rubin Museum of Art, New York. He is the author of numerous articles and books on Tibetan art, literature, and history, including A Saint in Seattle, Tibetan Thangka Painting, The Mollas of Mustang, and Enlightenment by a Single Means. He lives in Washington State.
or
Not Currently Available for Direct Purchase
Copyright © 2020 American Booksellers Association