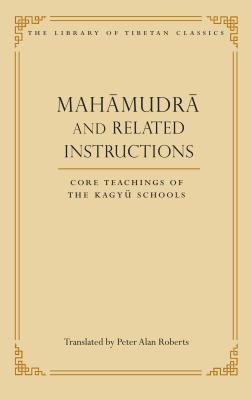 Core Teachings of the Kagyu Schools (Library of Tibetan Classics #5)

The Kagyu school of Tibetan Buddhism began in the eleventh century with such renowned figures as Marpa and Milarepa, and its seminal meditative traditions are Mahamudra and the six Dharmas of Naropa. Mahamudra teachings focus on the cultivation of profound insight into the nature of the mind. The Mahamudra texts in this volume include a lucid work by the celebrated master Tsele Natsok Rangdrol and works by the twelfth-century master Shang Rinpoche, the great Third Karmapa, the Eighth Tai Situ, and Drukpa Pema Karpo. The volume also contains an inspirational work by Gampopa, the Drigung Kagyu root text, The Single Viewpoint, the Sixth Shamarpa's guide to the six Dharmas of Naropa, and finally an overview of tantric practice by Dakpo Tashi Namgyal, author of the famous Moonlight of Mahamudra. The texts in this volume were selected by the preeminent scholar of the Kagyu school, Khenchen Thrangu Rinpoche.

Praise For Mahamudra and Related Instructions: Core Teachings of the Kagyu Schools (Library of Tibetan Classics #5)…

"This is a truly splendid volume, filled with a rich range of teachings...A wonderful collection covering some of the most important texts of the Kagyu lineage and essential reading for those wishing to deepen their connection with, and understanding of, the mahamudra tradition."
— The Middle Way Journal

"This collection is a treasury of "great seal" teachings from the most renowned gurus of the Mahamudra lineage, each text precious beyond compare. Every page exudes freshness of realization, holding the keys to our own personal awakening."
— Judith Simmer-Brown, Professor, Naropa University and author of Dakini's Warm Breath

"Those drawn to the profound insights and esoteric practices of the Kagyü tradition of Tibetan Buddhism long have been in need of an anthology of texts on such major Kagyü teachings as Mahamudra, the Six Dharmas of Naropa, and the Single Viewpoint. With this wide-ranging collection of translations, Peter Alan Roberts has fulfilled that need splendidly, bringing us fresh renderings of previously translated texts, as well as pioneering translations of new material, including Dakpo Tashi Namgyal's great overview of Buddhist tantra. The introduction provides a concise and scholarly overview of Kagyü history, while the translations are clear, accurate, and accessible. No anthology can give us every important text from a tradition as long-lasting and varied as the Kagyü, but the masters and works represented here truly are essential, and students who wish to understand the Kagyü in detail and depth will, from now on, have Roberts' rich compilation as their indispensable starting point."
— Roger R. Jackson, Carleton College

"The Library of Tibetan Classics brings together the essential texts of Tibetan literature. Of excellent quality and great value to scholars, the translations are accessible to nonspecialists as well, and thus should allow a wide audience to gain access to the treasures of the Tibetan tradition. A truly extraordinary accomplishment."
— Georges B.J. Dreyfus, Williams College

"The editing and production are first-rate."
— John R. Newman, New College of Florida

"This new series edited by Thupten Jinpa and published by Wisdom Publications is a landmark in the study of Tibetan culture in general and Tibetan Buddhism in particular. Each volume contains a lucid introduction and outstanding translations that, while aimed at the general public, will benefit those in the field of Tibetan Studies immensely as well."
— Leonard van der Kuijp, Harvard University

"This is an invaluable set of translations by highly competent scholar-practitioners. The series spans the breadth of the history of Tibetan religion, providing entry to a vast culture of spiritual cultivation."
— Jeffrey Hopkins, University of Virginia

"Erudite in all respects, this series is at the same time accessible and engagingly translated. As such, it belongs in all college and university libraries as well as in good public libraries. The Library of Tibetan Classics is on its way to becoming a truly extraordinary spiritual and literary accomplishment."
— Janice D.Willis, Wesleyan University

"The Library of Tibetan Classics project should be among the top priorities for thinking people in our culture at this time. We stand at a kind of "end of history," in terms of our traditional, unilinear "Western" culture, which has caused us to overdevelop our abilities to control and manipulate the material elements of life, while remaining underdeveloped in our ability to control ourselves. We now urgently need to learn from the resources of all the other great cultures of our world, especially those which developed "spiritual sciences." Tibetan culture is the living matrix of the ancient Indian Buddhist culture that is no longer fully accessible elsewhere. It has been blown out of Tibet itself by the incursion of the Chinese imperium, but its living representatives have spread its positive influence to the far corners of the earth. They daily demonstrate their ability to serve the needs of humanity in these difficult times. Therefore, the systematic translation and publication of the sources from which the Tibetans themselves continue to learn even in the most difficult circumstances, is of the greatest benefit and the utmost necessity for us."
— Robert A.F. Thurman

Peter Alan Roberts was born in Wales and lives in Hollywood, California. He earned a BA in Sanskrit and Pali and a DPhil in Tibetan Studies from Oxford University (Harris-Manchester College). For more than thirty years he has been working as an interpreter for lamas and as a translator of Tibetan texts. He specializes in the literature of the Kagyu and Nyingma traditions with a focus on tantric practices, and he is the author of The Biographies of Rechungpa.

Khenchen Thrangu Rinpoche is a senior scholar within the Kagyu tradition of Tibetan Buddhism and the author of many books and commentaries. He was born in Kham, Tibet, in 1933 and entered Thrangu Monastery at age seven. He serves as the main tutor to His Holiness the Seventeenth Karmapa and travels worldwide giving teachings and leading retreats. Based in Nepal and India, he is also abbot of Gampo Abbey in Nova Scotia and founder of Vajra Vidya Retreat Center in Crestone, Colorado.
Loading...
or support indie stores by buying on