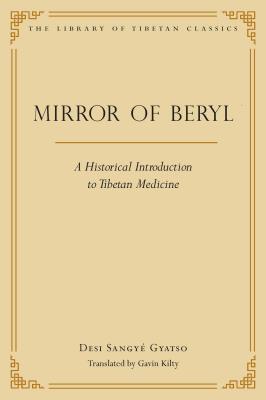 A Historical Introduction to Tibetan Medicine (Library of Tibetan Classics #28)

Composed while its author was the ruler of Tibet, Mirror of Beryl is a detailed account of the origins and history of medicine in Tibet through the end of the seventeenth century. Its author, Desi Sangye Gyatso (1653 - 1705), was the heart disciple and political successor of the Great Fifth Dalai Lama and the author of several highly regarded works on Tibetan medicine, including his Blue Beryl, a commentary on the foundational text of Tibetan medicine, The Four Tantras. In the present historical introduction, Sangye Gyatso traces the sources of influence on Tibetan medicine to classical India, China, Central Asia, and beyond, providing life stories, extensive references to earlier Tibetan works on medicine, and fascinating details about the Tibetan approach to healing. He also provides a commentary on the pratimoksha, bodhisattva, and tantric Buddhist vows. Desi Sangye Gyatso's Mirror of Beryl remains today an essential resource for students of medical science in Tibet.

Desi Sangye Gyatso (1653-1705), the heart disciple of the Fifth Dalai Lama, became the ruler of Tibet at age twenty-six and held sway over the country for over twenty-five years before his tragic death in a power struggle with the Mongol chieftain Lhasang Khan. A layman his entire life, he was a thorough administrator, overhauling the structure and regulations of the major Geluk monasteries and setting up many new institutions, such as the renowned Tibetan Medical Institute in Lhasa. He famously commissioned a set of seventy-nine medical paintings, and he composed White Beryl, an authoritative work on all aspects of astronomical calculation and divination practiced in Tibet at his time. Gavin Kilty has been a full-time translator for the Institute of Tibetan Classics since 2001. Before that he lived in Dharamsala, India, for fourteen years, where he spent eight years training in the traditional Geluk monastic curriculum through the medium of class and debate at the Institute of Buddhist Dialectics. He also teaches Tibetan language courses in India, Nepal, and elsewhere, and is a translation reviewer for the organization 84000, Translating the Words of the Buddha.
Loading...
or
Not Currently Available for Direct Purchase