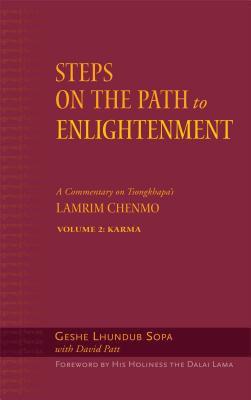 Steps on the Path to Enlightenment

This second volume of the five-volume commentary by the renowned Buddhist scholar Geshe Lhundub Sopa focuses on the key Buddhist concepts of karma, or cause and effect, and dependent origination. Considered one of the finest living Buddhist scholars, Geshe Sopa provides commentaries essential for anyone interested in a sound understanding of Tibetan Buddhist practice and philosophy. Never has a book gone into such clear detail on karma and dependent origination--concepts which, despite many references in contemporary culture, are too often misunderstood. Here, Geshe Sopa starts from the beginning with a faithful reading of the Lamrim Chenmo and, in the end, leaves readers with the proper tools for incorporating core Buddhist concepts into their study, teaching, and practice.

Born in the Tsang region of Tibet in 1923, Geshe Lhundub Sopa is both a spiritual master and a respected academic. He rose from a humble background to complete his geshe studies at Sera Je Monastic University in Lhasa with highest honors and was privileged to serve as a debate opponent for the Dalai Lama's own geshe examination in 1959. He moved to New Jersey in the United States in 1963 and in 1967 began teaching in the Buddhist Studies Program at University of Wisconsin-Madison, where he is now professor emeritus. In 1975, he founded the Deer Park Buddhist Center in Oregon, Wisconsin, site of the Dalai Lama's first Kalachakra initiation granted in the West. He is the author of several books in English, including the five-volume comprehensive teaching, Steps on the Path to Englightenment. David Patt received his PhD in Buddhist Studies from the University of Wisconsin-Madison and is the author of A Strange Liberation: Tibetan Lives in Chinese Hands. He recently served as executive director of the Dzogchen Foundation. Tenzin Gyatso, the Fourteenth Dalai Lama, is the spiritual leader of the Tibetan people. He frequently describes himself as a simple Buddhist monk. Born in northeastern Tibet in 1935, he was as a toddler recognized as the incarnation of the Thirteenth Dalai Lama and brought to Tibet's capital, Lhasa. In 1950, Mao Zedong's Communist forces made their first incursions into eastern Tibet, shortly after which the young Dalai Lama assumed the political leadership of his country. He passed his scholastic examinations with honors at the Great Prayer Festival in Lhasa in 1959, the same year Chinese forces occupied the city, forcing His Holiness to escape to India. There he set up the Tibetan government-in-exile in Dharamsala, working to secure the welfare of the more than 100,000 Tibetan exiles and prevent the destruction of Tibetan culture. In his capacity as a spiritual and political leader, he has traveled to more than sixty-two countries on six continents and met with presidents, popes, and leading scientists to foster dialogue and create a better world. In recognition of his tireless work for the nonviolent liberation of Tibet, the Dalai Lama was awarded the Nobel Peace Prize in 1989. In 2012, he relinquished political authority in his exile government and turned it over to democratically elected representatives. His Holiness frequently states that his life is guided by three major commitments: the promotion of basic human values or secular ethics in the interest of human happiness, the fostering of interreligious harmony, and securing the welfare of the Tibetan people, focusing on the survival of their identity, culture, and religion. As a superior scholar trained in the classical texts of the Nalanda tradition of Indian Buddhism, he is able to distill the central tenets of Buddhist philosophy in clear and inspiring language, his gift for pedagogy imbued with his infectious joy. Connecting scientists with Buddhist scholars, he helps unite contemplative and modern modes of investigation, bringing ancient tools and insights to bear on the acute problems facing the contemporary world. His efforts to foster dialogue among leaders of the world's faiths envision a future where people of different beliefs can share the planet in harmony. Wisdom Publications is proud to be the premier publisher of the Dalai Lama's more serious and in-depth works.
Loading...
or support indie stores by buying on