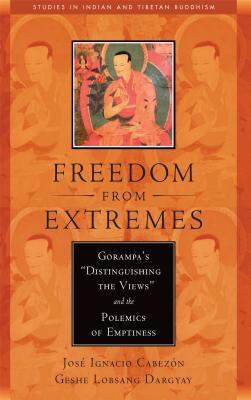 What is emptiness? This question at the heart of Buddhist philosophy has preoccupied the greatest minds of India and Tibet for two millennia, producing hundreds of volumes. Distinguishing the Views, by the fifteenth-century Sakya scholar Gorampa Sonam Senge, is one of the most important of those works, esteemed for its conciseness, lucidity, and profundity. Freedom from Extremes presents Gorampa's elegant philosophical case on the matter of emptiness here in a masterful translation by Geshe Lobsang Dargyay. Gorampa's text is polemical, and his targets are two of Tibet's greatest thinkers: Tsongkhapa, founder of the Gelug school, and Dolpopa, a founding figure of the Jonang school. Distinguishing the Views argues that Dolpopa has fallen into an eternalistic extreme, whereas Tsongkhapa has fallen into nihilism, and that only the mainstream Sakya view - what Gorampa calls "freedom from extremes" - represents the true middle way, the correct view of emptiness. Suppressed for years in Tibet, this seminal work today is widely regarded and is studied in some of Tibet's greatest academic institutions. Gorampa's treatise has been translated and annotated here by two leading scholars of Tibetan Buddhist philosophy, and a critical edition of the Tibetan text on facing pages gives students and scholars direct access to Gorampa's own words. Jose Cabezon's extended introduction provides a thorough overview of Tibetan polemical literature and contextualizes the life and work of Gorampa both historically and intellectually. Freedom from Extremes will be indispensable for serious students of Madhyamaka thought.

Jose Ignacio Cabezon is XIVth Dalai Lama Professor of Tibetan Buddhism and Cultural Studies at the University of California Santa Barbara. He studied physics as an undergraduate at Caltech, trained as a monk at Sera Monastery in India, translated for the Dalai Lama into Spanish, and in 1987 earned his PhD from the University of Wisconsin-Madison. Before coming to Santa Barbara, he was on the faculty of the Iliff School of Theology in Denver from 1989-2001. Cabezon is the author or editor of a dozen books and many more articles on various aspects of Tibetan religion and religious studies, with research interests as diverse as Madhyamaka philosophy, Buddhism and sex, and Tibetan ritual. His latest publication, the Sera Project, is a peer-reviewed database of essays, over 1400 images, and an interactive map of Sera Monastery in Lhasa, Tibet. The late Geshe Lobsang Dargyay was trained at Drepung Monastery in Tibet. He got his doctorate in Buddhist and Tibetan Studies from the Ludwig Maximilians Universitat and held teaching and research positions in Vienna, Hamburg, and Calgary. Geshe-la was the first Tibetan to receive a doctorate from a Western university. He passed away in 1994.
or
Not Currently Available for Direct Purchase
Copyright © 2020 American Booksellers Association