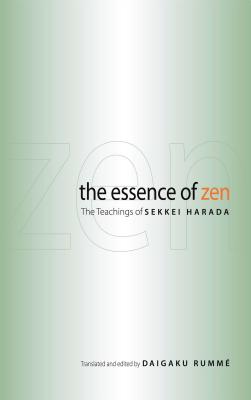 The Essence of Zen (Paperback)

The Teachings of Sekkei Harada

The Essence of Zen is an expert's guided tour of the ins and outs of the tradition's approach to meditation, enlightenment, and the oneness of all things. To read it is to enter into one of modern Japanese Zen's most subtle and sophisticated minds. Sekkei Harada skillfully pushes us to drop those parts of ourselves that grasp and make demands regarding our understanding or progress in meditation practice. He enables us to see clearly-and steer clear of-the philosophical stumbling blocks that can make the path precarious. The Essence of Zen represents the most succinct of his teachings, making it of immediate value to anyone with an interest in Zen. The book also contains Harada's explanations of the differences between the tradition's primary schools, making it particularly helpful to newcomers.

Sekkei Harada is the abbot of Hosshinji, a Soto Zen training monastery and temple, in Fukui Prefecture, near the coast of central Japan. He was born in 1926 in Okazaki, near Nagoya, and was ordained at Hosshinji in 1951. In 1953, he went to Hamamatsu to practice under Zen Master Gien Inoue, and received inkashomei (certification of realization) in 1957. In 1974, he was installed as resident priest and abbot of Hosshinji and was formally recognized by the Soto Zen sect as a certified Zen master (shike) in 1976. Since 1982, Harada has traveled abroad frequently, teaching in such countries as Germany, France, the United States, and India. He also leads zazen groups within Japan, in Tokyo and Saitama. From 2003-2005, he was Director of the Soto Zen Buddhism Europe Office located in Milan. Daigaku Rumme was born in 1950 in Mason, City Iowa, USA. In 1976, he entered Hosshinji as a layman and was ordained by Harada Roshi in 1978. He lived and practiced at Hosshinji until 2003. On several occasions he accompanied Harada on his visits to Europe, India, and the United States, as his interpreter. Since 2003, Rumme has been on the staff of the Soto Zen Buddhism International Center located in San Francisco.
or
Not Currently Available for Direct Purchase
Copyright © 2020 American Booksellers Association